The Pink Unicorn at Off the Wall 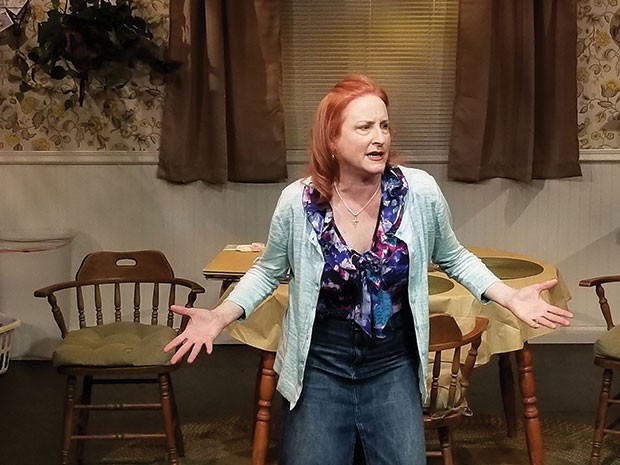 Welcome to the comfy, cozy kitchen of a woman whose world is imploding, in Off the Wall Theater’s production of The Pink Unicorn. Elise Forier Edie’s 2013 one-woman drama has many comic moments and a few tough truths, as a conservative Christian widow grapples with revelations of the gender identity of her only child.

Directed by Ingrid Sonnichsen, Unicorn immediately pulls us into the home and mind of Trish and her tale of bewilderment, concern, anger and, mostly, love. Off the Wall is staging Unicorn over three separate single-weekend runs throughout the year; as seen in the February staging, Amy Landis channeled Trish’s strengths and fragilities, seamlessly blending with the character as she copes and grows with her fast-changing place in a society she thought she knew.

As a storyteller, Trish enlivens (though does not actually portray) a lively set of offstage characters covering a surprising gamut of the populace of a small Texas town. There’s the pompous principal, the once-revered pastor and the town’s outcasts, who turn out to be surprisingly supportive. It’s not just Trish’s religious beliefs that are being challenged, but her very being.

Unicorn explores many issues, most satisfyingly the differing mother-daughter relationships. Trish reflexively seeks to understand and protect her child, while dodging her own mother’s incessant put-downs. There’s a lot here about family and families, as Trish reconciles with her long-estranged brother and with the differing beliefs of her late husband.

Bonus: Rarely have I seen the ACLU depicted so accurately. (Disclaimer: I’m on the Pittsburgh chapter’s board, and I remember real cases of school districts banning all extracurricular groups rather than allow a Gay-Straight Alliance on campus.) There’s nothing off the wall about the truthfulness and humanity of The Pink Unicorn. And free cookies at intermission, too.

An Accident at Off the Wall