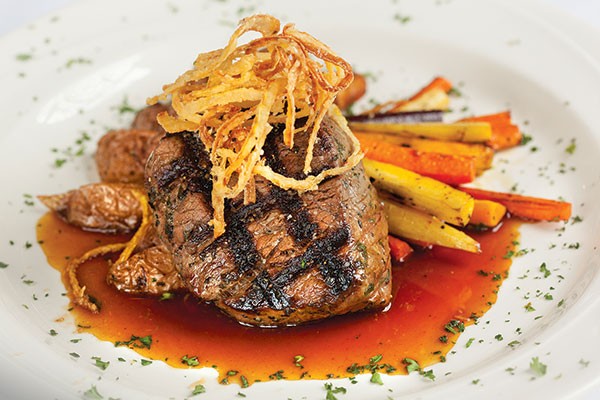 We tend to think of the suburbs as being without history, having neither the densely detailed patina of the city nor the land-that-time-forgot aura of the agrarian countryside. But the hinterlands have a history too, and you can find it if you know where to look.

One suburban restaurant with a past is The Pines Tavern, located near Babcock Boulevard in the far North Hills. Its earliest incarnation was as an after-work gathering place where local farmers mingled with the staffs of three grand, Gilded Age estates. (One of these belonged to former Pittsburgh Mayor Edward Babcock; now you know why there's a boulevard winding all the way up there.)

Over the years, The Pines was converted to a speakeasy, country market, dance hall and even a gas station. After reopening as a tavern in 1978, it entered local culinary history with its emphasis on locally produced, in-season foods — long before these ideas took hold in the broader restaurant culture. Perhaps inspired by the location's past as a farmland nexus, owner Mike Novak committed early to the farm-to-table ethos. Over time, this has developed into extensive on-site gardens and fields, a greenhouse for herbs and baby greens, and even beehives.

While the lawn and patios are now closed for the winter, the light of a full moon shone magically on the fields and gardens the night we visited, and the tavern's interior glittered with holiday decor. The Pines Tavern's name suggests a rustic character, but the restaurant's casual elegance felt suitable for everything from drinks with friends to an intimate wedding.

Befitting its emphasis on freshness and seasonality, The Pines has not just one menu, but three: seasonal, weekly and daily. Offerings range from complex entrée plates with recommended wine and beer accompaniments to more casual burgers, sandwiches and "comfort fare." The selection was frankly a bit overwhelming, but the descriptions were so uniformly enticing that, after some study, it seemed that there could be no wrong choices.

The tavern burger seemed like a must-have. We tried ours with bacon. The patty was pink in the middle but a touch dry. However, the bacon was excellent, crisp and meaty and not too smoky, and the big, soft bun was flavorful and benefitted from a quick, hot char on the grill. Golden fries on the side were good, not great; next time we'll take advantage of the sweet potato or garlic-parmesan options.

Tavern meatloaf — an outstanding value at $12 — was a couple of thick slices served with loaded mashed potatoes, extraordinarily tender green beans (almost as thin as haricots verts) and sweet roasted apple slices. The meatloaf was not especially beefy-tasting, suggesting plenty of binder, but the binder added herbal flavor, not just bulk and cohesion.

The charcuterie platter tempted largely due to the promise of venison stick, local ring baloney, and beet-pickled quail egg. The last was fantastic: delicate, sweet and just slightly pungent. The venison was smoky and just gamy enough, while the bologna was reminiscent of summer sausage. The only misstep was cocktail rye crisps that were dried rather than toasted, resulting in a texture akin to staleness.

A grilled asparagus salad was a real standout. The thinner-than-a-pencil spears were quickly charred over flame and served alongside a poached egg and toasted bits of ciabatta (a brilliant cross between croutons and crumbs), as well as arugula, shaved parmesan and pancetta. The egg yolk melded with white truffle oil, bringing the disparate flavors and textures together into probably the best asparagus dish Jason's ever had. 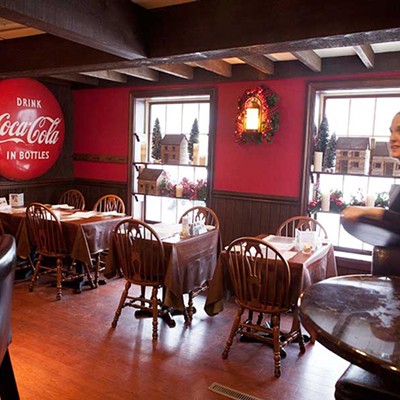 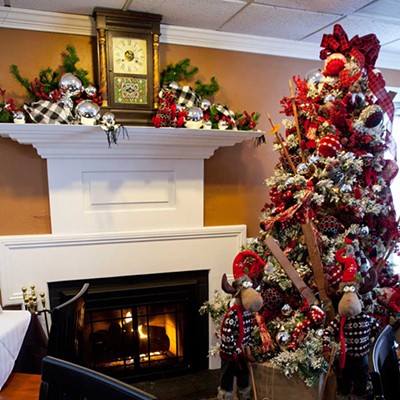 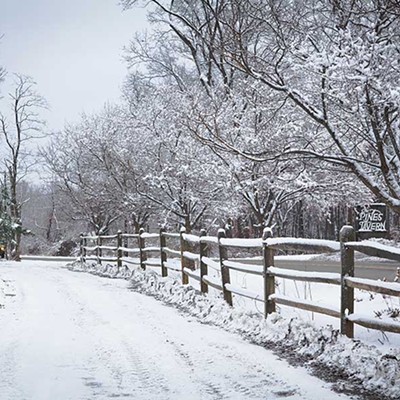 The panini of the day offered a tantalizing combination of shaved leg of lamb, red pepper-balsamic aioli, baby spinach, roasted tomatoes, caramelized onions and crumbled blue cheese. The latter ingredient, with its saline pungency, was key to uniting and enhancing the other flavors, but unfortunately, there was not nearly enough of it.

Jason's salmon from the weekly menu was downright disappointing. Roasted on a cedar plank, the fish tasted more of damp firewood than aromatic cedar, while the remaining components — roasted garlic grits, wild mushroom broth, mustard greens and crispy leeks — constituted a wide range of flavors and textures that, unlike the asparagus salad, utterly failed to cohere.

Still, The Pines' commitment to "fresh dining from our landscape" was a winning complement to its warmly welcoming atmosphere. A more tightly focused menu might help the kitchen focus on its strengths.