This is an escapist romantic comedy, plain and simple 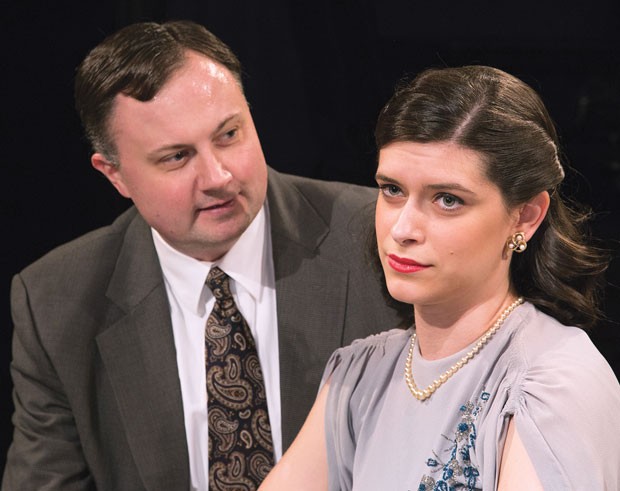 Eric Leslie and Carley Adams in The Philadelphia Story, at Little Lake

If you’re seeking a classic comedy that hits all the right nostalgic notes, look no further than The Philadelphia Story, now at Little Lake Theatre. Based on the 1939 play (with its subsequent 1941 film adaptation), this Philip Barry-penned show follows the impending second-round nuptials of socialite Tracy Lord (Leighann Calamera), who must contend with her colorful family and a pair of spies from a gossip magazine, all while coping with the antics of her charming ex-husband, C.K. Dexter Haven (the affable Everett Lowe).

Director Lora Oxenreiter helms a first-rate cast with standout performances from Eric Leslie and Carley Adams as the reporter and photographer, respectively, sent to infiltrate the wedding. The success of The Philadelphia Story, however, hinges on the lead character, and in that regard, this production is a rousing success. Last seen on the Little Lake stage in Last Train to Nibroc, Calamera is a versatile actress who transforms a role so indelibly associated with Katharine Hepburn into something entirely her own. Tracy Lord might be described as “made of bronze,” but Calamera gives a lively, and at times heartbreaking, performance that feels all too real and relatable.

The show is not flawless. The shortcomings of The Philadelphia Story, though, are not the fault of Little Lake, but of time itself. In particular, when class and privilege have become topics that are increasingly salient in everyday conversation, a tale of a proverbial “poor little rich girl” can be a little hard to bear. While the play is self-aware enough to anticipate the audience’s chagrin toward the Lords’ lavish lifestyle, it offers little insight or notable commentary on the subject. Quite the opposite, in fact: The denouement opts for the status quo, with the rich characters coming off as entitled to a happy ending due to all their myriad “struggles.”

Still, The Philadelphia Story has never aimed to be a deep political text. This is an escapist romantic comedy, plain and simple, and at that, it thrives without reservation. For a breezy good time, the genial cast and capable direction make this production a delightful experience.