The Perks of Being a Wallflower at Prime Stage

An often-affecting stage version hews to the 2012 film 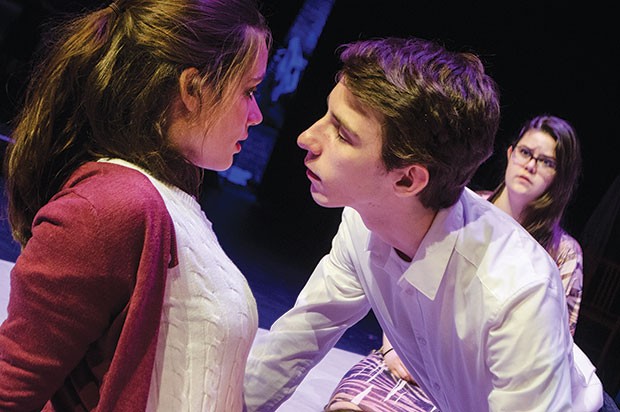 Photo courtesy of Laura Slovesko
Left to right: Julia Zoratto, Peter Joseph Kelley Stamerra and Lyric Bowman in The Perks of Being a Wallflower at Prime Stage

THE PERKS OF BEING A WALLFLOWER

continues through Sun., May 14. Prime Stage Theatre at the New Hazlett Theater, 6 Allegheny Square East, North Side. $5-25. primestage.org
The Perks of Being a Wallflower, on stage courtesy of Prime Stage Theatre, owes a lot to its movie predecessor. Adapted by Hailey Rohn from Pittsburgh native Stephen Chbosky’s 1999 young-adult novel, this often-affecting stage version hews a little too closely at times to Chbosky’s 2012 film. And yet, Rohn’s cinematic structure sometimes helps to keep the by-now-familiar and self-consciously edifying material moving.

The Pittsburgh-set story’s central figure is Charlie (Peter Joseph Kelley Stamerra), a soon-to-turn-16 high school freshman with no friends and no prospects of making any. He’s quiet and withdrawn, hoping to be a writer some day, and recovering from a bout of depression earned by too many tragedies for even a YA character. Soon he’s befriended by the wily and confident gay senior Patrick (Logan Shiller) and Patrick’s sage stepsister Sam (Julia Zoratto), who has an affinity for dating men rather than boys, thanks to a pre-teen initiation to sex.

The elders bond with the wallflower waif, and life lessons get learned, reminding us once again that kids can be at once kind and cruel, and that kids in dramas always find a way to kiss and make up.

Rohn’s collage of short scenes, punctuated now and then by a longer one, quickens the pace of Jeffrey R. Cordell’s sometimes slow direction. The use of images projected onto an upstage screen allows the play to visualize the novel’s epistolary structure and even recreate the movie’s jubilant night ride through the Fort Pitt Tunnel. One does get the impression, though, that the only way to form friendships in high school is by drinking and taking drugs. True enough, I suppose.

The three leading actors are all authentic high school students. Sam is the least well developed, and the affable Stamerra doesn’t fully inhabit Charlie’s necessary pathos. Shiller has the showiest role, and he handles it adroitly. The story takes place in 1991, and while it’s hard to imagine a gay kid being that out at that time, it’s nice to think that one such person like Patrick did exist to show his descendants the way.

All Quiet on the Western Front at Prime Stage Theatre

To Kill A Mockingbird at Prime Stage Theatre