The people make the pictures in the Carnegie's Digital to Daguerreotype. | Features | Pittsburgh | Pittsburgh City Paper

The people make the pictures in the Carnegie's Digital to Daguerreotype. 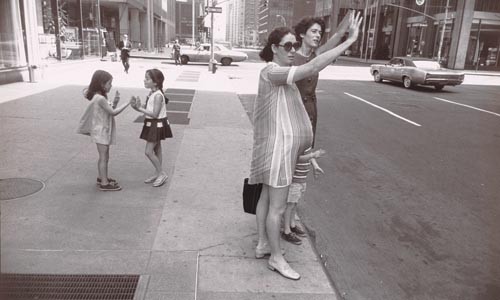 As art-forms go, photography is fairly new. Cro-Magnon men were painting on cave walls 30,000 years ago, and sculpture is older than the pyramids. Photographs date to 1825. Compared with brushes and chisels, the common camera is a complex machine, and photography a highly technical process. Pinhole camera notwithstanding, even the simplest cameras require shaped lenses, adjustable apertures, nitrocellulose film and a basin full of chemicals. Digital cameras rely on nano-circuitry. Finger-paint this is not.

For such reasons, photography gets a lot of artistic flak. Some artists like to blame photographs for the decline of painting. Walter Benjamin, the great German essayist, feared that "mechanical reproduction" would ruin the authenticity of art. And when Susan Sontag published On Photography in 1977, she all but blamed cameras for the fall of mankind.

Here is a masterful rebuttal: Digital to Daguerreotype: Photographs of People is a cozy, two-room exhibit at the Carnegie Museum of Art. This isn't just an anthology of nice pictures; it's also a walk through time, starting with ultra-modern pixilated photos and going back to the mid-19th century.

The exhibit smoothly combines beautiful portraits with a tutorial of photographic techniques: the ubiquitous silver-gelatin print, the blue-hued cyanotype, albumen prints (which required egg whites to develop), and the titular daguerreotype, a process that used polished silver plates. Daguerreotype quietly defends photography as a versatile, creative medium with a distinguished history.

Daguerreotype will appeal to a wide variety of visitors-- students, history buffs, pro photographers and weekend aesthetes. But the exhibit's curators have cleverly focused the exhibit on photography's most powerful subject: human beings. No matter how many Ansel Adams landscapes of snowcapped mountains you see, humanity is the driving force of photography, and Daguerreotype is a brilliant homage.

The exhibit features some big names, but for such an intimate collection, it is full of surprises. Larry Clark, director of the street-youth movie Kids, offers two frightening images of Tulsa, Okla. ("Lady with Choker Necklace Getting Needle" and "Lady With Black Eye"). Each portrays a white woman sharing a room with anonymous company; each woman is a victim (of drugs, of domestic violence) and doesn't seem to notice. This is photography at its most sublime -- visiting another world, whether frightening or exotic, and offering us a split-second of that experience. In the language of art, photography is always an exclamation point.

Throughout the exhibit we see the gamut of human expressions and environments: Two greasy men lounge around their auto shop; a dying Italian woman surrounds herself with religious art; a girl holds a newly caught fish on a pier; a pregnant woman stands on a New York sidewalk, eager for a taxi. There are posed portraits as well, but they pale before the candid "street photography" of W. Eugene Smith and Teenie Harris. The more spontaneous-looking the scene, the more moving the picture.

Indeed, instead of the usual menagerie of "greats," Daguerreotype is clearly biased toward such Pittsburgh artists. Dylan Vitone is a Carnegie Mellon professor and ambitious photographer: His landscapes are pieced together from several different frames, so the full picture can capture 180 degrees or more. "Sprinkler," Vitone's single contribution, shows children playing in several different streets at once -- splashing in the water, playing with dolls, hurling water-balloons, dribbling soccer balls and sprinting down the concrete.

As we approach, in the exhibit's chronology, the origins of photography, we see this cyanotype: "Carnegie Library of Pittsburgh: Blind Woman Reading a Book." The 1908 portrait is credited to Ralph W. Johnston, and thanks to a one-line caption, the picture of a Victorian lady and her book is worth considerably more than its 1,000 words. Efficient and smartly arranged, Daguerreotype shows photographs at their best -- as social documents and as works of beauty. We can only hope for an encore.