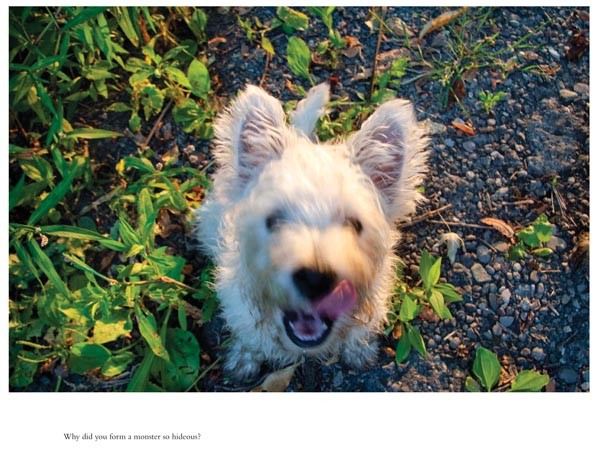 Charlee Brodsky is an established figure and then some, a long-time professor at Carnegie Mellon University and a widely exhibited photographer. Her black-and-white prints have often inclined toward the melancholy in subject and tonality: Homestead in the wake of its mill closings, gastric weight-loss surgery, living with mental illness — profound subjects with more potential to enlighten than to entertain. Brodsky has also regularly incorporated collaborative text in her work, from stories by writers to comments hand-written by her subjects. And she's even done a color photography project in India. That is to say, she spans the somewhat overlapping yet divergent fields of documentary and art photography.

All of which is backstory to Brodsky's Artist of the Year exhibit, Good Dog, a new direction for the artist that builds on her strengths while taking considerable risks artistically.

If you think that a show of more than 100 photos of the same dog paired with fragments from literary works sounds not that promising, think again. It's an idea that, in the hands of self-described "dog person" Brodsky, opened a field of considerable possibility. The five major series of dogs-and-text that make up the exhibit are presented in two different forms: as ink-jet-printed artist's books generously available for unsupervised perusal and, on the walls, as somewhat larger though still intimate unframed photos with text. Plus two bonus books! Never redundant, it's an idea that has legs.

The exhibit is packed with casual, almost snapshot-like color photos of Max, Brodsky's West Highland white terrier, sometimes accompanied by Sam, another Westie in Brodsky's household. Max is seen engaged in typical outdoor dog activities as he sniffs, gazes, investigates, rolls in the grass, cavorts with Sam, and activates even the most mundane scene, sometimes while dragging his leash behind him. The locales aren't much, the kind of places one might walk a dog or let one run free, with little more to offer photographically than a few plants, some peeling paint or occasional graffiti. But Brodsky manages to wring a serviceable composition out of just about anything. In a few cases, photographic sequences or montage do some additional lifting. The camera looks straight ahead when Max is out in front or points down when he's close at foot. Basically, Max exhibits the chipper personality for which terriers are prized, and there's something inspirational in his lack of ambivalence regarding his mission in life.

While the photos are inherently interesting, the conjoined texts are indispensable to the success of the project. Brodsky, who appears to be unusually well read for an artist, has employed recognized literary texts as a source of excerpts for each of the artist's books/photographic series, in the process raising issues relating to humanity and society. Ranging from Shakespeare to Dostoyevsky and Samuel Beckett, the texts cover topics from love to politics and creativity and are characterized by high seriousness that, remarkably, is neither compromised nor at odds with the playful photos.

The pairings are witty and clever and varied in their interrelationship, as they go about their business of suggesting interpretations without attempting to limit us to them. In the series "Monster," Max stands in for Mary Shelley's Frankenstein's monster, with Max's non-human charms suggesting that monsters and, more broadly, difference are to some extent in the eye of the beholder. In "Dual Tracks," words by naturalist John Muir parallel the photos, not linking to specific images as Muir idolizes nature and Max roams the margins of civilization, from parking garages to brownfields. Yet idealist Muir and realist Max merge in Muir's remark that there is something precious in the most barren portion of the world. Leaps of logic don't rankle; Georgia O'Keeffe talks of painting a flower in a huge scale while Max is overshadowed by a bush, but the gap between word and image is liberating, not conflicting. Illustration, which this sort of is, needn't be literal-minded.

As subject and symbol, Max is the star of Brodsky's show — and the dog for the job — eliciting or linking to a host of characteristics and behaviors cited in the text. Max is variously a stand-in for a literary character or characteristic or a symbol of the artist's quest, and maybe the viewer's, too. Max's role may shift, but it's never confusing. I left feeling uplifted, flush with open-ended insights regarding the human condition and pleased to be sharing the planet with canine consciousness.