The past, present, and future of trolleys in Pittsburgh 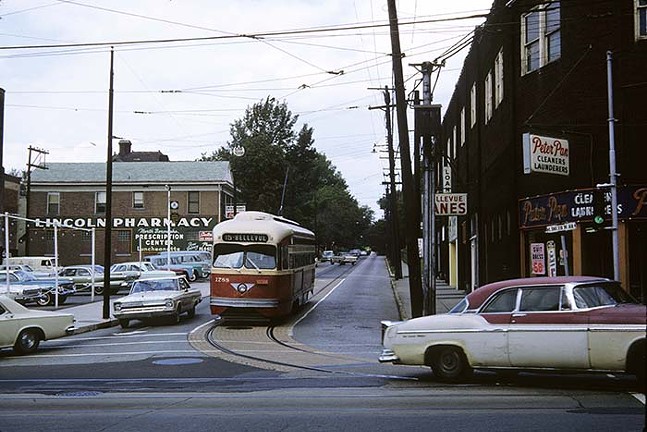 Photo: Ed Miller, courtesy of the Pennsylvania Trolley Museum
Trolley car at Balph and Lincoln Avenue, 1965
Trolleys are often romanticized as a quaint, bygone mode of travel, relegated to black-and-white images and that song Judy Garland made famous in the film Meet Me In St. Louis. Now they are widely regarded as a novelty, a thing to rent for weddings or to charm tourists.

But Scott Becker, executive director and CEO of the Pennsylvania Trolley Museum in Washington, Pa., points out that, while Pittsburgh’s trolley or streetcar systems are not nearly as extensive as they used to be, they still serve as a viable mode of transportation in the city.

"A lot of people get confused," says Becker. "Every week, someone says, 'Isn't it a shame they got rid of all the trolleys or all the streetcars in Pittsburgh?' and I say, 'Well, you can ride one today.' And they look at me funny and go, 'What are you talking about?'"

Becker cites how the Port Authority of Allegheny County still runs two trolley lines from South Hills Village to and from Library into Pittsburgh, and over to the North Shore on to the North Side. In total, he says Port Authority has 83 vehicles powered by an overhead wire running through Beechview, Mt. Lebanon, Overbrook, and other communities.

"The trolley era is not over in Pittsburgh," he says.

The era, as he puts it, dates back to the late 1800s, when Becker says horse-drawn Citizens Trolleys helped people get around, especially on rainy days when the city's dirt streets turned to mud. The horses were replaced with trolley cars, which rose to prominence and ran for decades, transporting the region’s growing population of workers and families.

The Pennsylvania Trolley Museum has served to highlight the past, present, and future of trolley and light rail in the state, including the Pittsburgh region. According to its website, the museum touts a collection of nearly 50 street and electric railway cars, 20 of which are operational on the museum’s four-mile ride.

At its peak, Becker says Pittsburgh boasted 68 streetcar routes and over 600 miles of track. This was until the Port Authority took over the trolley lines from Pittsburgh Railways in 1964, inheriting what Becker says was a rundown system.

"And the lines were pretty tired," says Becker. "But they hadn't put a lot of money in because they were trying to get out of the business."

As a result, the organization decided to mostly retire the system. Becker says that politics and other factors, including labor strikes, also contributed to the demise of Pittsburgh's trolleys as a main form of travel. He says many city planners in the early 1960s saw trolleys as "old fashioned" and no longer wanted to create infrastructure to support them.

The museum highlights this with artifacts like the last Presidents' Conference Committee, or PCC streetcar that ran in Pittsburgh, the iconic vehicles operating from 1936 to 1999.

Becker adds that resources like the museum give insight to the important role trolleys played in the lives of people in Pittsburgh.

He says that, in comparison with cars, which became the preferred method of commuting in and around Pittsburgh, trolleys have many benefits, including being more environmentally friendly.

Becker points out that Southwesten Pennsylvania also still serves as a center for trolley technology and manufacturing, including Brookville Equipment Corporation, which is one of the few makers of streetcars in the U.S.

Becker says the museum recently expanded — including a new 21,000-square-foot education center set to open in 2022 — and will also launch programming covering other fascinating aspects of the trolley system. One program they have planned, called Rolling Melting Pot, will cover how the streetcar connected various ethnic neighborhoods, and how some cars even had advertising written in different languages for non-English speaking immigrant passengers.
click to enlarge 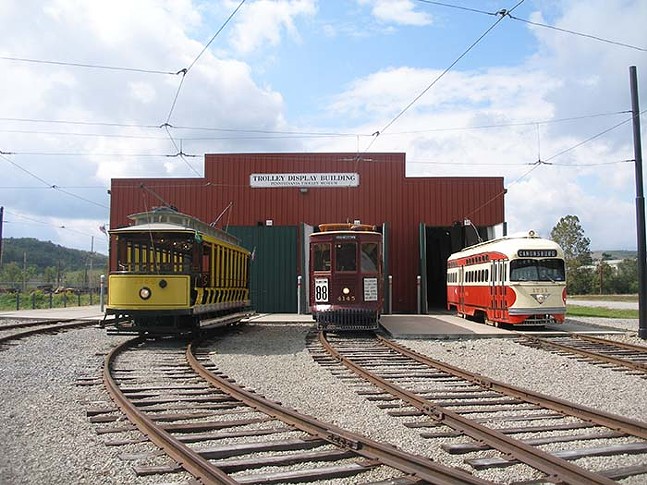 Photo: The Pennsylvania Trolley Museum
From May 22-23, the museum will also host Fred Rogers Weekend to honor the late children’s television pioneer, who Becker says popularized the term “trolley” in Pittsburgh on his show Mister Rogers' Neighborhood, which famously featured a tiny trolley car.

Becker also gives credit to the Port Authority for continuing to keep the trolley and light rail systems in Pittsburgh going and keeping the tradition alive. Port Authority also recently released a plan to possibly extend its light rail lines north to Bellevue and Cranberry.

"The story is not over, it's not like you're talking about dinosaurs here," says Becker. "People ride to work every day on a street car in Pittsburgh. So this is not an old story here. This is not old history. I always try to tell people that, actually, the exciting thing is that all this technology has been upgraded over the years and it still has a place and in cities to get people around."
Pennsylvania Trolley Museum. 1 Museum Road, Washington. pa-trolley.org

Why Pittsburgh is above average for non-car transit, and how it might be getting better