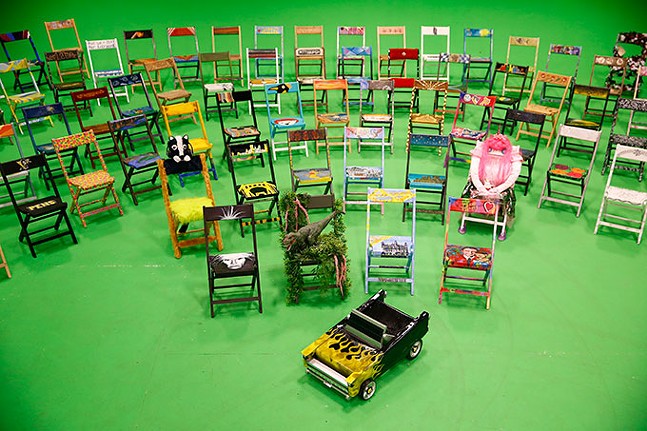 Pittsburgh likes parking chairs. It's a cultural touchstone referenced in jokes, on t-shirts, or in an ad promoting tourism to the Steel City. But like most things Pittsburghers claim as uniquely Pittsburgh things — pierogies, basement toilets, hills — the parking chair is not exclusive to Pittsburgh. So why, and when, did Pittsburghers start embracing it with such fervor?

Annual snowfall in Pittsburgh is erratic, ranging between 25 and 75 inches in any given year. But when it does snow, the shovels come out, and along with them, the chairs (though the chairs can be seen year-round). If a person spends the time and effort to dig out their space, they tend to feel a sense of ownership over it, hence the chair.

Parking chairs can be found in Baltimore, Boston, and other snowy cities. In Chicago, the practice is known as "dibs." But Pittsburgh, never a city to love anything halfway, has a special affection for parking chairs.

On Tue., Feb. 25, VisitPittsburgh will host an event at the August Wilson African American Cultural Center celebrating 90 painted chairs made by a variety of Pittsburgh artists, including a classic Pittsburgh skyline by Jeanine Murch, a remixed transgender flag by Stew Frick, and a henna design by Soma Chatterji. The event coincides with an online auction of the chairs, so Pittsburghers around the world can have one. Profits from the auction go a charity to help local artists. 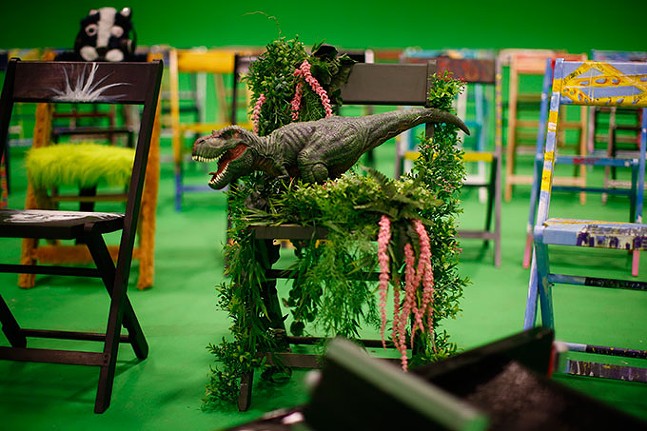 The auction is in conjunction with VisitPittsburgh’s "Pull up a chair" campaign. The ad, which debuted last April, includes the slogan "You are welcome here," and features scenes of nice Pittsburghers offering a chair to companions; a classmate at school, a musician at Heinz Hall, a concierge at a hotel. In one scene, a man reading his paper on the porch sets out a chair for his neighbor, who is going out shopping with her daughters. When she gets back, bags of groceries in hand, her old parking space is right where she left it (note: no snow).

“It was just meant as a little homage to Pittsburghers,” says Tom Loftus, chief marketing officer of VisitPittsburgh. “From a national standpoint, when they look at our campaign, they're just seeing all these chairs and the parking chair is one of them.”

A parking chair can be anything, really: a folding chair, a plastic lawn chair, an old La-Z-Boy, a laundry basket, a traffic cone, a beach chair, a tall lamp. Anything works as long as it's big enough to get the message across. The more personality, the better, because that way someone is more likely to chuckle at it instead of shaking their fist at the sky.

Commonwealth Press, a local printshop known for its Pittsburgh-themed shirts, stickers, and other merch, sells black and yellow parking chairs that say, "NO PARKING" and "DO NOT MOVE." The website has a disclaimer for the chair that states, "If you use anything besides a vehicle to hold a parking spot in the city of Pittsburgh, you can be fined $300," which is mentioned because, in 2013, a police officer called the store and told them to, according to the Pittsburgh Post-Gazette.

While parking chairs may seem like an odd target for civic pride, the phenomenon could indicate a lack of sufficient parking in the city, but also an obsession with getting a good parking spot that, while not unique to Pittsburgh, residents are certainly vocal about. According to the Pittsburgh Police, parking chairs are not legal, but officers generally don't remove the chairs or fine their owners (it's also legal for anyone to take a chair sitting in a parking space).

Pittsburghers have a special knack for embracing its cultural touchpoints and elevating them to ludicrous degrees. There are the chairs, there was the floating dumpster, and of course, the sinkhole bus, which within days inspired bus ornaments, cupcakes, tattoos, t-shirts, and memes reveling in the chaos of a bus sunk into the ground, pointing toward the sky.

But the embrace of the chair in this way is still relatively new. Google search results for "Pittsburgh parking chair" start peaking after 2010. Searches of previous years are limited to occasional articles, but mostly just links related to parking in general. In 2010, an entry for "parking chair" is added to Urban Dictionary, described as "derived from Pittsburgh traditions." In 2010, the Post-Gazette wrote a kind of profile on the parking chair. "How do you spot a newcomer to Pittsburgh? They stare in wonderment at a chair in a parking space," it posits in the opening sentence.

“It's that symbol of that old parking chair that you might find in a church bingo hall, that everybody's had them, they've seen them when they were growing up in school, “ says Loftus. “I think it's a little attachment to the past too.”

The changing times, as well as the changing climate might run the actual parking chair into extinction. Winters will get warmer, like it did this year, with less snow to shovel and replace with a chair. And it’s hard to imagine millennials or Gen Z pulling an old chair out of the basement to mark their territory. Instead, the parking chair might have better luck living on as a mascot of the old Pittsburgh.