CP Photo: Jared Wickerham
Park House owner, manager, and chef Zamir Zahavi
To many, it seems, The Park House’s ability to work as a popular music venue was an enigma under the ownership of Zamir Zahavi. And people let him know it. In one memory, he recalls a consultant from Austin, Texas summing up the establishment’s ability to host music.

“He would sit at the bar nightly,” says Zahavi, a native of the small island nation of Curaçao, who has lived in Pittsburgh since 1982. “And I’ll never forget when he wrote, ‘Park House is the worst place to have music but somehow they make it work.’ I was looking at my bartender and I read it to him and said, ‘Look at me with a straight face — this is a compliment, right?’”

If the last 17 years under Zahavi's ownership is any indication, that opinion was correct. Just look at the steady schedule of musical acts the historic bar has seen: There were weekly bluegrass nights every Wednesday, plus live music on Fridays and some Saturdays. The bar also served as a venue for the annual Deutschtown Music Festival.

But that legacy is coming to a close at the end of December, not long after Zahavi publicly announced that he was selling the business.

“It was definitely not because of the pandemic,” says Zahavi, who adds that he first made the decision a year ago. “I was just getting tired of the hours. It was good when I was in my 40s and 50s. Now I’m 61. It’s just not the same.”

While he ushered in an era of live music, it was actually his son, Ari, who suggested he do it in the first place. While Zahavi was hesitant at first, he welcomed the local bluegrass jam group, the Shelf Life String Band, and it quickly changed his mind.

“They played, and it wasn’t as bad as I thought it was going to be,” says Zahavi. The band would go on to play every Wednesday night at Park House over the next 10 years.

Before he even started playing there, Shelf Life String Band banjo player and vocalist, Joe Dep, lived a few blocks from the Park House and remembers having one of his first legal drinks there when he turned 21.

“I fell in love with the place,” he says, adding that it reminded him of the famous bar on the long-running sitcom Cheers. “You had regulars who moved away all come back. It was cool to see as the years progressed, how different people would come back and visit the place.” 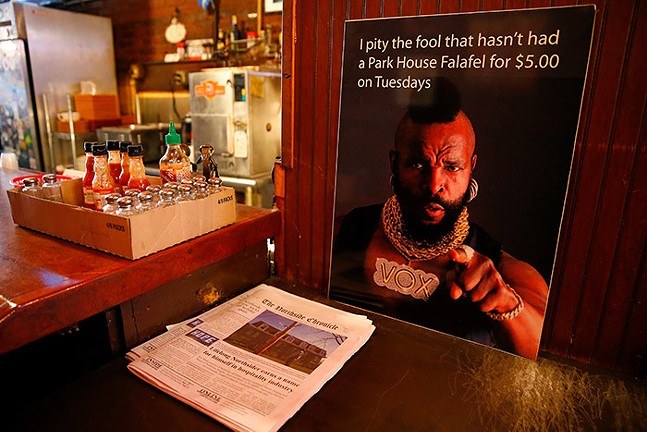 CP Photo: Jared Wickerham
A sign of Mr. T that reads, “I pity the fool that hasn’t had a Park House Falafel for $5.00 on Tuesdays,” hanging inside the Park House
Dep, who affectionately refers to Zahavi simply as Z, says the owner took care of the local musicians who played in his establishment. Zahavi expands on this, saying he provided money, libations, and food to every act, regardless if they brought in “20 people or 100 people.”

“That was my protocol for all the bands,” he says. “We made all the bands feel comfortable and wanting to come and play again. It was so successful.”

One of the people who noticed The Park House’s charm was Deutschtown Music Festival co-founder Cody Walters, who says the bar was “definitely one of the inspirations for the festival.”

“One of the things we wanted to do was highlight the neighborhood live local music, and The Park House was already doing that, showing people what we already did have,” says Walters, who has lived in the North Side for 13 years.

Walters says that at the time he and fellow co-founder Ben Soltesz were coming up with the festival before its 2012 launch, Park House was “the heart and soul of live music in the neighborhood," a distinction that tended to draw in crowds.

“My joke always was if you had to go to the bathroom, don't go to The Park House, you'd run into too many people you knew,” says Walters. “That really was how it was.”

Still, Zahavi says in the beginning it was difficult bringing acts in, as the North Side had what he calls a “bad reputation.” He remembers having to convince local country-bluegrass legend Slim Forsythe to play there.

CP Photo: Jared Wickerham
Customers personally engraved mugs
“He did not want to play on the North Side,” says Zahavi, who offered to host him for dinner and a drink. “He showed up with his girlfriend. They sat down and had dinner and he said, ‘This place is awesome. I will play here.’ He had to convince his friends and fans to come to the Park House. It wasn’t easy.”

Both Walters and Dep are sad to see Park House go, with Dep expressing regret over not being able to play there one last time, as the pandemic has kept live music out of the venue since March. They also hope that whoever takes over the Park House makes any necessary renovations to the aging building while still preserving the charm of the bar, the interior of which has changed little over the decades.

“My hope is someone would come along who would have a turnkey vision for the place and want to continue running it as The Park House,” says Walters. “I can't see that space not coming back and serving the neighborhood, regardless of whether it remains The Park House or becomes something else.”

As for Zahavi, he foresees embarking on a new venture revolving around his falafel and hummus that became the culinary trademark of The Park House. He also expresses pride over being part of The Park House’s history and the revitalization of the North Side, saying that, unlike when he first moved in, he now sees more people moving in than moving out.

“I will never have this experience again ever,” says Zahavi. “I actually became part of the community. … It was so much fun. It was just so good to help bring the North Side up.”