The PA Market serves up a satisfying, if confused concept

The bones of a great food hall are there in spades, but there are some kinks to work out 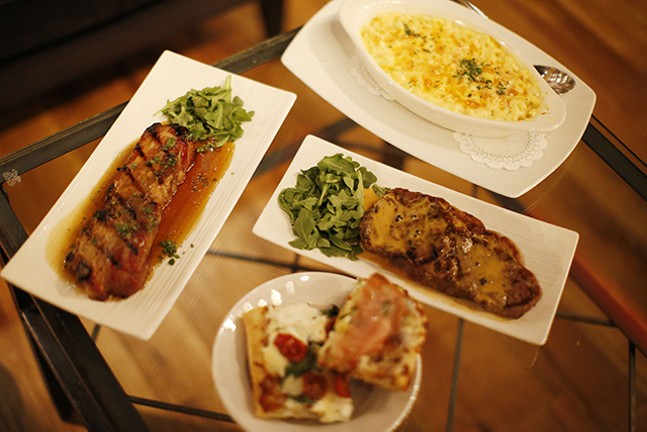 Change is not new for the property at 108 19th Street in the Strip District. The towering structure has masqueraded as clubs, restaurants, and even a TV star, playing a part in the short-lived show, The Godfather of Pittsburgh. In March 2016, the space began to take a new form: a wine-driven, European-inspired food hall, The Pennsylvania Market.

Navigating the PA Market is like walking a maze, it sprawls the length between 18th and 19th streets. On one end, there’s an open-air courtyard with vendor kiosks, a bar, and tables. Inside, a staircase leads to the main floor, featuring four restaurant concepts, a so-called “wine library,” and two full-service bars.

I visited the food hall on a lazy Tuesday. To my left were three counters, each serving a different menu. One focused on charcuterie. Bistro 108 served nibbles and entrees. The third one, Romulus Pizza, was an independently operated Roman-style pizzeria. Up another set of stairs was the wine library, decorated wall-to-wall with wine shelves. Every bottle was offered at retail price; diners were welcome to open purchased bottles in the restaurant without a corkage fee. 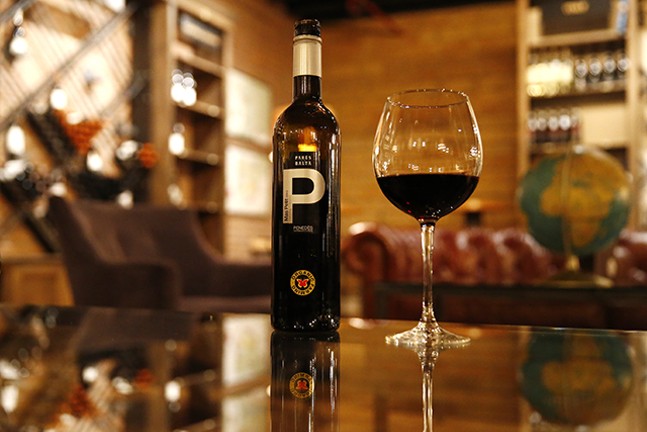 CP photo: Jared Wickerham
A bottle of 2015 Pares Balta Das Petit cabernet wine sits on a table near the retail wine section of The Pennsylvania Market

Before I settled in with my wine, I placed my dinner orders. I decided to try a little of everything: two slices from Romulus Pizza (one white slice, the other mortadella with artichoke), pork belly from the Bistro 108 nibbles menu and skirt steak and mac n’ cheese from its entree list.

The new market seemed confused. The wine library was glossy, high-class, with the ambiance of an old-school cigar lounge. Down the stairs, it transformed into a modern wine-bar with wooden high tops and benches. Around a corner were low, country-club style tables.

Dinner told a similar story. The pork belly, by far my favorite dish, was drowned by its maple glaze. But the meat was prepared well, cut easily, and a touch of sweetness added good flavor to the fatty meat. The skirt steak, swimming in a peppercorn sauce, didn’t excite me.

My baked mac n’ cheese was okay, but I was missing a char-speckled, cheesy crust. Mac n’ cheese served in a restaurant needs to be speech-stopping delicious. The dish I had was just alright.

I was split on the pizza. The white slice was fantastic while the mortadella fell flat. Ricotta cheese topped the white pie finished with cherry tomatoes and Italian seasoning, all on a bechamel-esque base. The ricotta was warm but still creamy, cut by acid from the tomatoes. The crust was spongy with a crunchy bottom, with visible, gorgeous air bubbles.

Despite some disappointment, I left feeling satisfied. I credited this to the atmosphere, ideal for sitting with friends, a bottle of wine, and a plate of cheese.

The PA Market has the skeleton of a great food hall. Still a fresh face in the city, there are kinks to smooth out. But the market is worth a visit if not for the cushy, leather couches then for the perfect Saturday afternoon glass of wine.

1. Globe - Before my visit to the PA Market, I don’t think I’d ever seen a globe used as a serious decoration. But there it was, front and center: kudos, PA Market. Not every restaurant can pull off globe decor.

2. Courtyard - Unfortunately, it’s cold, and the courtyard was not open when I visited. But the space, a host for retail, produce, and other vendors, was charming. It’s the ideal place for a summer beer.

3. Bottom floor tenants - The PA Market doesn’t live alone. On the bottom floor, tenants like East End Brewing and The Olive Tap have made the Pennsylvania Building their home.