An Oakland institution has closed up shop, with no plans of reopening after the coronavirus closures are lifted. The Original Hot Dog Shop, known affectionately as “The O,” has cleared out the two-story restaurant that has sat at the corner of Forbes Avenue and Bouquet Street for more than 60 years.

According to The Pitt News, a longtime manager of The Original Hot Dog Shop confirmed that the shop had closed for good, and doesn’t plan to reopen after the coronavirus closures are lifted.

Joanne Keys worked at The O for 35 years and told The Pitt News the closing was due to the ongoing coronavirus pandemic, as well as unspecified “other things.”

Photos shared on social media on Saturday afternoon showed the inside of the restaurant cleared out, including the grill.

City Paper reached out to co-owner Terry Campasano and the lawyer who represents the restaurant’s owners, but has not heard back. CP will update the story if/when the owners return requests.

Some on social media believed the restaurant closed because of the recent death of Morris "Moe" Simon, one of The O’s founders, but Pittsburgh Magazine reported that Simon has been retired since at least 2010. 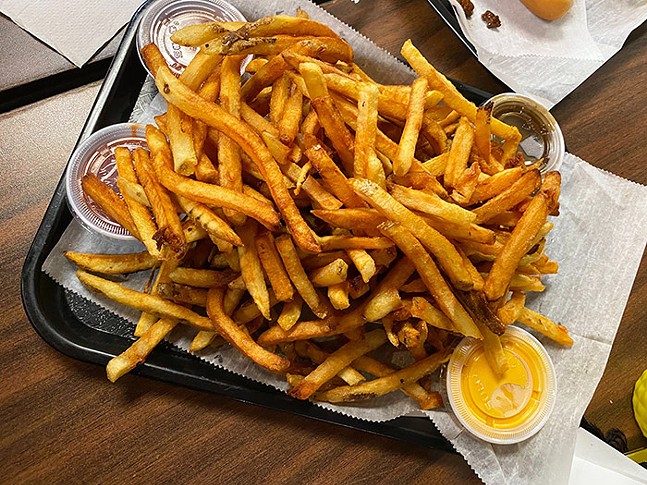 CP photo: Bryer Blumenschein
The O's much loved fries
Brothers Sid and Moe Simon opened the shop in 1960 and dedicated it to Sid’s wife Essie. The O was known for its great prices for hamburgers, hot dogs, large array of beer, and its famous fries. Large fries at the restaurant were truly colossal and came with cheese sauce and brown gravy.

According to a now deleted Facebook post from someone who claimed to be friends with the owners, the restaurant donated 350 boxes of potatoes to a local food bank, and co-owner Bruce Simon told friends that the restaurant was closing.

The restaurant was particularly popular with sports fans. Not only did it open just a few blocks from Forbes Field, where the Pittsburgh Pirates won the 1960 World Series on a famous walk-off home run, The O was also located near the University of Pittsburgh’s campus. Many Pitt fans and people in the Pittsburgh sports media shared their remorse. A #RIPTheO hashtag trended yesterday when rumors first spread that the iconic restaurant had closed down.


The O closing is about as bad as food news can be right now. The last photos I took there were when ⁦@rickaroundhere⁩ and ⁦@jon_speicher⁩ met for dinner. The chili cheese onion dogs were mine. #RIPTheO pic.twitter.com/MGnftdwYlQ

Even Pennsylvania’s Lt. Gov. John Fetterman (D-Braddock) shared his thoughts on losing the Oakland institution, calling the loss "tragic" and expressing his appreciation for the restaurant. Many Pitt students and alumni also mourned the loss of The Original Hot Dog Shop.


Tragic. I got to take my kids last summer in there for their 1st large fry. 😓

My girlfriend (now wife) came to see me at #Pitt for the first time. Where did we go? #TheO. Michelle, all of 105 lbs., walks up & orders a large french fry. She saw the size of the order and nearly fell over. We barley made a dent in it. I’ll never forget. #RIPTheO 🌭 pic.twitter.com/LICpWaC9PQ