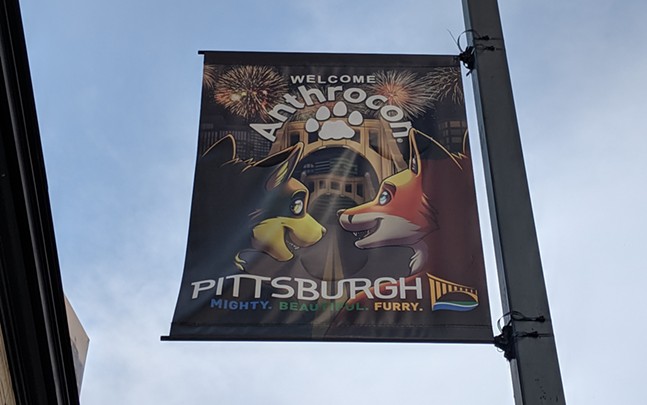 CP photo: Lisa Cunningham
An Anthrocon flag welcomes furries to Pittsburgh on Liberty Avenue in Downtown Pittsburgh.
Furries were just like most people when it came to stereotyping Pittsburgh.

Sam Conway, the CEO of nonprofit Anthrocon, is a native of Philadelphia, which is where the Anthrocon convention was held from 1999-2005. Conway says when Anthrocon was starting to look for another location for the annual furry convention outside of Philadelphia, he was approached by representatives from Visit Pittsburgh in 2005.

“I said, ‘No way! I don’t want to have a convention in a smoky city,’” says Conway of when he was first pitched on moving the convention to Pittsburgh. “I was very rude. It was terrible.”

But Conway says Visit Pittsburgh didn’t take no for an answer and asked that he just take a weekend to visit the city. He says he was a bit perplexed at the time, noting that a convention for furries was not the magnitude of the American Health Association, or some other big wig kind of convention.

He was reluctant, but he traveled to town, drove through the Fort Pitt Tunnel, saw the skyline, and was basically sold before he even met again with Visit Pittsburgh representatives.

“When I came around the bend, I thought, ‘When did this magnificent city get built in front of where Pittsburgh is supposed to be?” says Conway.

Things only got better from there, according to Conway. Representatives from local hotels and Visit Pittsburgh staff wined and dined Conway, put him up at the Westin in Downtown, but also came ready with binders of research, noting the economic and social benefits to having furries adopt the Steel City as their own. Then they showed Conway the David Lawrence Convention Center, and he was awed by its large open spaces and magnificent view of the Allegheny River.

“The city basically sold itself, but the credit goes to Visit Pittsburgh,” says Conway.

So, Anthrocon left Philadelphia and migrated to Pittsburgh in 2006. If there were any thoughts that the furries made the wrong choice, those were quickly assuaged the first day of the convention that year. People from Downtown restaurants, bars, and hotels all ascended to meet the furries at the convention center. Conway says they were there to welcome, greet, take pictures with, and even hug some of the furries.

“The city literally and figuratively ran out and gave us a hug,” says Conway.

Conway says Anthrocon and the furries have been in love with Pittsburgh ever since. He has been apologizing to Visit Pittsburgh for the last 14 years, saying he unfairly stereotyped the city of Pittsburgh. But he says that might have actually resonated stronger with furries, who have faced their own damaging stereotypes.

“Maybe that is why it resonated it,” says Conway. "We came here and realized, ‘Look at how wrong we were.’”

Visit Pittsburgh spokesperson Kristin Wenger says the organization is just thrilled to have built such a strong relationship with Anthrocon and the furries.

“They have a very, very firm commitment to the city, and us to them,” says Wenger. “The city just loves it and is very embracing. I don’t think they got that in Philadelphia.”

Wegner says Anthrocon’s commitment has come with economic benefits to Pittsburgh too. She says the convention and its guests have brought in $71 million in spending over the last 14 years. And it’s not just money for business, it’s local philanthropy too. Anthrocon usually partners with local animal shelters in the Pittsburgh region, and has raised more than $280,000 for them over the years.

“We just love them,” says Wegner. “We are so glad that they have just accepted our city, which we love, as their city that they love.”

Conway agrees. He says the relationships, the city itself, and Pittsburghers have ensured that Anthrocon has become a de facto permanent staple in Pittsburgh. He notes how Anthrocon has officially adopted Pittsburgh’s official colors (black and gold) as their officials colors on Anthrocon’s corporate flag.

“That is how much we consider ourselves Pittsburghers,” says Conway. “As long as I am chairman, wild horses couldn't drag us away, and I know because we have wild horses.”