The old and the new mingle as Dance Alloy marks 35 years.

Since taking over Dance Alloy Theater in the summer of 2009, artistic director Greer Reed-Jones has begun leaving her mark on the 35-year-old company. Even while programming more community-based offerings, she has maintained the troupe's national presence by bringing in top-flight choreographers like Alvin Ailey American Dance Theater artistic director-designate Robert Battle.

For the latest mainstage offering, however, Reed-Jones looks to Alloy's past as a path to its future.

From Where We've Come ..., running Dec. 2-5 at the New Hazlett Theater, is a 90-minute tribute program including works by former Alloy dancers Kevin Maloney and Andre Koslowski, and former Alloy artistic director Mark Taylor. Reed-Jones also premieres her own "... And We Were," which honors Taylor (who's an Alloy board member) and the four other artistic directors who came before her.

"And We Were" is a 10-minute multimedia work using dance, video and spoken word to reflect on Alloy's beginnings in 1976, as a dance collective, and its subsequent history.

Joining Reed-Jones' piece in the program's first half are two revivals of repertory works. Maloney's "The Son Is Father to the Man" (1994), set to traditional Yiddish lullabies and klezmer music, is a 10-minute male duet that explores the father-son bond.

Meanwhile, Taylor's "Swan Lake Act II" has a curious history. Inspired by Tchaikovsky's sweeping music for the ballet, Taylor set out to create a serious modern-dance work that followed the ballet's story but in his own movement vocabulary.

The audience at the 1993 premiere didn't respond in kind. "They laughed," says Taylor.

Though initially upset by that reaction, Taylor realized that reconstituting such a familiar ballet in the dance lexicon created a juxtaposition that people inevitably found funny. He says he accepted the work as "a loving satire," and reshaped it accordingly.

The program's second half features the world premiere of Koslowski's "When you hear hoofbeats, think horses." The 45-minute nonlinear dance-theater work for the full company, set to music by Rene Aubry and Balanescu Quartet, explores what would happen if we abandoned the social norms of a civilized society.

"What would happen to our ability to cohabitate if, for no reason, someone would walk up to a stranger and kick them or pull their hair?" says Koslowski, by phone from State College, Pa., where he operates Pennsylvania Dance Theater.

The piece was developed through rigorous experimentation, beginning in October, in which Koslowski gave the Alloy's dancers 10 assignments, ranging from making observations about people at a bus station to recording their own dreams. In the studio, the data from those assignments were integrated into the work by a painstaking process of trial and error to develop the work's movement vocabulary and shape its theatrical elements.

"Some of the things I have asked the dancers to do were not very easy," says Koslowski.

Koslowski says he pushed the dancers out of their comfort zones and in some ways frustrated them by constantly changing the work to get exactly what he wanted.

"He had us breaking sticks over another dancer's head, or trying to shove our own fist into our mouths," says Hearn. "It was pretty crazy, but he knows how to get what he wants out his dancers. We have to be real and raw in this work." 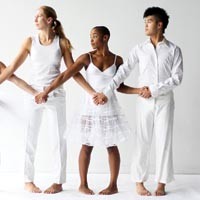 Dance Alloy marks 35 years with dancers -- and dances -- both old and new.