The North Side’s The Foundry transcend the gastropub scene 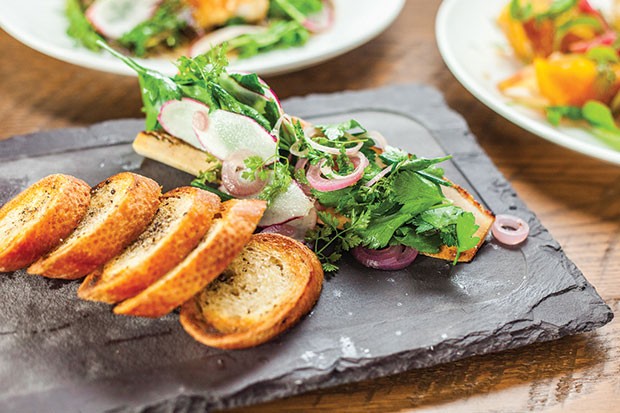 We misread the cues. Not all of them, but when we read about The Foundry, offering “fresh takes on pub favorites” (as per its website) in a spot between the stadiums on the North Side, we assumed it was another upscale sports bar, albeit one with barnwood, perhaps, in place of black-and-gold paint.

We were right about the barnwood, at least. With a name like The Foundry, industrial chic fixtures were inevitable. So were flat-screen TVs, but the walls were not completely paved with them, and one large dining room had none at all. We found our escape from TV dining on the outdoor patio, which opens directly onto the North Shore trail and the Allegheny riverfront beyond.

It was The Foundry’s menu, not its decor, that far surpassed the usual clichés of the modern upscale bar. This made sense once we learned that the executive chef is Mike Godlewski, who wrested the kitchen of the upper-crust Duquesne Club from the sleepy standards of yesteryear into the 21st century.

Now it’s time for the rest of us to sample his handiwork. While including such current gastropub standards as pork belly and mac-and-cheese, The Foundry’s palette of flavors was far broader than most. Godlewski lavished attention on each dish without pointless elaboration or tiresome overkill.

Take the roasted-pumpkin pierogi, simply sautéed in butter, sprinkled with toasted pepitas, and garnished with two distinctive elements: a smear of lavender-hued fig yogurt and a sprinkling of onions, caramelized with vadouvan, a French-influenced curry powder. Each component played a clear role, contributing to a tasty, well-rounded dish. The only shortcoming was in the pierogi themselves. The wrappers were thin yet suitably chewy, not to be confused with ravioli, but the filling was scant, sufficient to bring a hint of squash flavor, but only just. With other, bolder flavors abounding, the dish could have handled a more robust dose of pumpkin.

Pork-belly bites were tender-chewy morsels, lightly sweetened by a bourbon glaze, and tossed in a bowl with tiny, pan-seared cherries. Hardly larger than peas, these offered pleasing pops of juicy sweetness. Thin slices of jalapeño, seemingly intended to counter both the richness of the meat and the sweetness of the bourbon and fruit, were extraordinarily spicy, setting off a hunt for more water.

Some of the best items didn’t rely on fancy flourishes, but were solid combinations in judicious proportion, executed perfectly. Such was our extraordinary grilled-cheese sandwich. The unique combination of cheddar and boursin between thick slabs of farmhouse bread, griddled to a golden crisp, resulted in a delectable melding of tastes and textures that was simple, yet sophisticated. If ever a grilled cheese could qualify as fine dining, this is it.

An a la carte side dish of deep-fried cauliflower with chorizo aioli was perplexingly similar to the “caramelized cauliflower” served with an entrée of roasted chicken breast, with no aioli in evidence. But we were too busy demolishing all the cauliflower to complain. The florets were softened by the heat, retaining faint suggestions of crispiness at their edges, and coated in a savory sauce that lent them an almost meaty flavor. On the chicken plate, they were mixed with tiny, aptly named “marble potatoes.” The chicken itself was perfectly cooked, tender and moist, and a pesto-like salsa verde deliciously combined both herbal and tangy notes.

Chicken sandwiches are frequently given short shrift as “light” alternatives to burgers, but The Foundry’s pickle-brined fried-chicken sandwich deserves top billing. A juicy slice of white meat in a craggy, crunchy crust — more substantial than tempura, but with a reminiscent airiness — was beautifully complemented by vinegary dill-pickle slices and creamy, herbal green-goddess dressing. A soft, buttery brioche bun provided the final touch to this most glorious of chicken sandwiches.

In the midst of all this goodness, grass-fed flatiron steak took a major misstep. It appeared perfect, crusted on the outside and ruby-red within. But char utterly dominated the flavor of the beef and even of the black-garlic hollandaise that coated it. Beneath the meat, a bed of lightly roasted Brussels sprouts and deeply roasted potatoes created a pleasing interplay of bright green and dark brown, sharp and nearly sweet, but it was hard to get past the powerful bitterness of the char.

Amid all the stadium-area sports bars appealing to the game and concert crowds, The Foundry’s higher ambitions transcend a gastropub scene that has largely fallen into a rut.

Where to find Easter Sunday meals and sweets in Pittsburgh