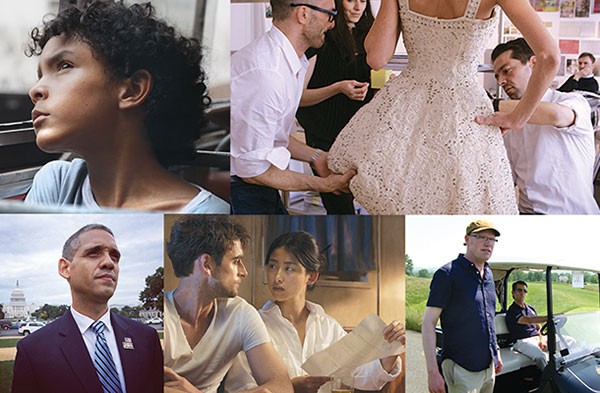 Clockwise from top left: Bad Hair, Dior and I, A Dangerous Game, The Secret Sharer and Bronx Obama

The Carnegie Mellon International Film Festival: Faces of Work runs Thu., March 19, through April 11, with more than a dozen feature films and documentaries. Unless noted, films screen at McConomy Auditorium, on the CMU campus, and are $10 ($5 students/seniors). A complete schedule, including guest speakers and specials events, is at www.cmu.edu/faces. Some recent films screening this week:

A MASTER BUILDER. Jonathan Demme's new film is an adaptation of Henrik Ibsen's 1892 play about an elderly, well-regarded architect (Wallace Shawn). The unexpected arrival of a young female houseguest (Lisa Joyce) prompts the pair to recall — somewhat differently — a notable project from a decade earlier. Demme will attend the screening, which is followed by a reception. 7:15 p.m. Thu., March 19. Regent Square. $20 ($10 seniors/students)

DIOR AND I. Frédéric Tcheng's documentary goes behind the scenes at Christian Dior, as the haute-couture house incorporates a new artistic director, Raf Simons, and he has to quickly create a spring line. It's easy to dismiss such rarefied clothing, but this is still a compelling look at a surprisingly collaborative creative process, including participation from the rarely seen tailors and seamstresses who construct and hand-sew these gorgeous garments. In English, and French, with subtitles. 7:15 p.m. Fri., March 20.

A DANGEROUS GAME. Anthony Baxter's sequel to his 2011 muckraking doc, You've Been Trumped, which found Scots pitted against Donald Trump over the construction of a luxury golf course in Aberdeen. That saga continues (and includes a sit-down with the adversarial Trump), and Baxter intercuts it with another community-vs.-developers golf-course deal in the historic Croatian city of Dubrovnik. Baxter also spends a bit of time asserting that golf courses, in general, are often an economic and ecological disaster — a topic likely worthy of its own film. In English, and Croatian, with subtitles. 6:30 p.m. Tue., March 24.

PLACEBO. After his brother, Kuldeep, injures himself by punching a window, jeopardizing his future at an exclusive Indian medical school, filmmaker Abhay Kumar begins a year tracking his brother and several other students there. It's an intimate, sometimes harrowing portrait of these young men's hopes and insecurities, and sometimes their fundamental  immaturity. Scenes range from hazing rituals to existential crises. Kumar, shooting mostly on a handheld camera, captures interesting visuals, with some expressionistic touches (including compelling animated sequences). It turns out that this incredibly competitive school has a suicide epidemic; is it from "depression," or merely "academic stress"? Placebo is fascinating: clear-eyed but shot with abundant sympathy. In English and Hindi, with subtitles. 7:15 p.m. Wed., March 25 (McConomy) and 4 p.m. Thu., March 26 (Carlow University) (Bill O'Driscoll)

BRONX OBAMA. In 2008, laid-off single-dad Nuyorican Louis Ortiz discovered that his uncanny resemblance to Barack Obama could be a way to earn money. So he embarks on a curious journey, subbing for Obama in cheesy movies, music videos and on a comedy "presidential debate" tour, where he shares a motel room with "Romney" and "Clinton." An intriguing look at the bizarre intersection of entertainment and politics, and what it's like to be somebody else for a job. Director Murdock and Ortiz (as Obama) will attend the screening. 7 p.m. Thu., March 26.

Also screening this week at McConomy: The Secret Sharer (7:15 p.m. Sat., March 21), a modern-day adaptation of the Joseph Conrad novella; Bad Hair (5 p.m. Sun., March 22), from Venezuela, about a young boy's search for identity; and The Dabbawallas (9:15 p.m. Tue., March 24), the late Paul Goodman's documentary about lunch-deliverymen in India.