The Night Alive at City Theatre 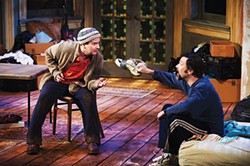 Sometimes, it’s a disadvantage to see a play on opening night. A friendly house, crackling with a second-beer giddiness, can make mundane lines humorous, and push tragedy toward comedy.

Such seemed to be the case during the opening scenes of The Night Alive, City Theatre’s Pittsburgh-premiere production of the widely acclaimed 2013 work by talented Irish playwright Conor McPherson. However, the drama eventually found its natural equilibrium between lightness and darkness, and the cast brought off a seriously engaging performance.

Set in Dublin during the recent recession, the story centers on Tommy, perceptively played by Rod Brogan, and his clownish sidekick, Doc (Ciaran Byrne), whose relationship falls somewhere in the existential spectrum between those of The Honeymooners’ Ralph Kramden and Ed Norton, and Beckett’s Vladimir and Estragon. As they eke out a living through odd jobs, the hunger of these characters is palpable: Just look at Tony Ferrieri’s impoverished set and you are famished.

Blood enters the drama surreptitiously on the face of Aimee (Hayley Nielsen), a rootless prostitute Tommy befriends and brings home like a wounded kitten. Nielsen has the toughest role, as she has such little stage time, yet she is effective in making us believe her powerful evolution — from victim to victimizer.

There is a steep arc to this story, and the way it’s played for humor in the first half makes it harder for the cast to push the stone of the drama over its apex, and down into the darker business of the second.

But it succeeds through the direction of Tracy Brigden, who convincingly navigates the course of redemption in each characters’ journey, whether through compassion or murder.

The only hitch occurs with the strange intercession of Kenneth (Brendan Griffin), Aimee’s pimpish boyfriend, in a scene that feels much more Freudian than fearful.  Kenneth’s attack on Doc is so passive-aggressive as to challenge credulity.

Not to be missed is Noble Shropshire’s performance as Maurice, Tommy’s elderly uncle; Shropshire’s comic timing is brilliant.

The ultimate question of whether these souls are truly redeemed is never fully resolved, which makes this darkly comedic production of The Night Alive all the more intriguing.