The new Philippine Nationality Room was a 20-year process, but worth the wait for Pittsburgh’s passionate Filipinos | News | Pittsburgh | Pittsburgh City Paper

The new Philippine Nationality Room was a 20-year process, but worth the wait for Pittsburgh’s passionate Filipinos 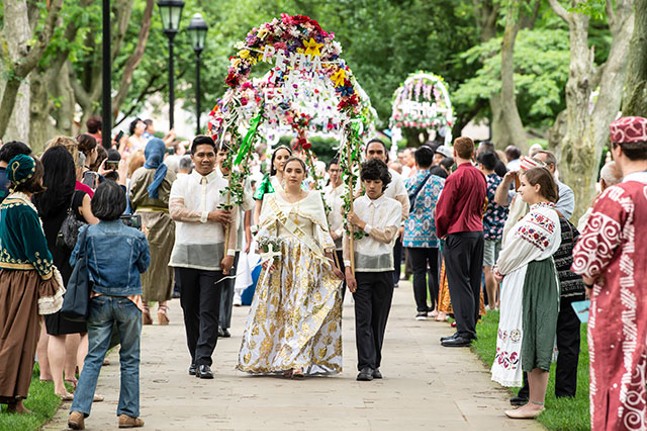 Aimee Obidzinski/University of Pittsburgh
Cerina Wichryk, a member of Oakdale’s Filipino community, walks under an archway of flowers.

After two decades of planning, the new Philippine Nationality Room in the Cathedral of Learning ran into a conflict in its final stages over the seating arrangement.

The initial vision was to situate the classroom with long benches in a circular pattern, with a space in the middle where the professor would stand. It's an unconventional design for a Nationality Room, and apparently the safety regulations agreed. The long benches would violate a number of requirements for classroom safety, so in the end, the room was furnished with 24 wooden, straight-backed chairs.

That disagreement ended up being just the final road bump in the journey to make the room a reality. Located on the third floor of the University of Pittsburgh’s Cathedral of Learning, the room had its grand opening celebration on June 9, after a process that lasted 21 years, with starts and stops, countless disagreements, and hundreds of thousands of dollars raised. But for a Filipino community that numbers less than 2,000 people in Allegheny County, the representation of a room in Pittsburgh showcasing its rich culture is a milestone.

“When the committee and the task force got together, they wanted to create a room where, if a Filipino came, [they] would walk into the room and say, ‘Yes, this is the Filipino room,’” says Maryann Sivak, who works in the Nationality Rooms as the Assistant to the Director. “And they succeeded, because many times when I come and do the tour, they say ‘Yep, this is Filipino.’”

The room, completed late in 2018, is the latest entry in Pitt’s collection of 31 Nationality Rooms — classrooms that double as miniature museums for the cultures they represent. The Philippine room is meant to resemble a 1700s-era bahay na bato, a stone house style found all over the Philippines.

Judith Portugal, a member of the Philippine-American Performing Arts of Greater Pittsburgh (PAPAGP), sits on the task force that created the nationality room. She says the design truly encapsulates the uniqueness of Filipino culture and design.

Also included is a legendary golden bakunawa dragon painted on the ceiling, a Spanish-influenced mirror framed with etched glass panels, and lattice-patterned windows filled with translucent capiz shells collected in the Philippines.

Warren Bulseco, an architect at WTW Architects in the North Side, signed on to design the room pro bono in 1998, when the planning process began. He is grateful for the opportunity to work on a project that is “so meaningful.”

At the time, of course, Bulseco had no idea he was volunteering for a 20-year project with a revolving door of collaborators. Eventually, he ended up working with Philippines-based architect Popi Laudico, and a national search found Eliseo Art Silva, a Los Angeles-based artist who created the ceiling murals showing flora and legendary creatures from the Philippines.

And then there were the politics. There were disagreements over the best way to represent the diversity of the Philippines, a 7,100-island archipelago where more than 170 languages are spoken. And there were arguments about who should be officially in charge of the project.

Then, around 2012, the project came to a complete halt for several years. It looked like the idea of a Philippine Nationality Room might be abandoned entirely, and the money raised returned to donors.

But no one wanted that to happen. So in 2015, they came to a compromise. They would create a task force consisting of two members each of the three big Filipino-American organizations: The Filipino-American Association of Pittsburgh, the Philippine-American Medical Society of Western Pennsylvania, and the PAPAGP. Together, they worked for the next three years to make the Philippine Nationality Room a reality. 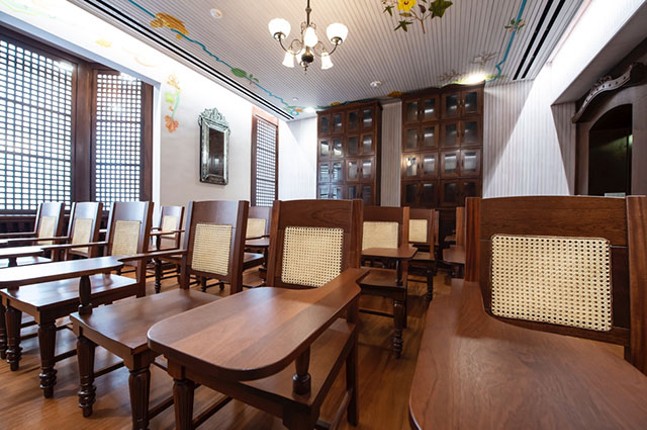 Bulseco says the conflicts and delays ended up making the final product better.

“You have to fight off personal views of what you think the room should be, or you always get those people who want to be the leader, the person in front," says Bulseco. "But in the end, it made a stronger organization, a stronger group, a stronger conviction in the design.”

Jaime Abola, another member of the Philippine Nationality Room Task Force, says many young people don’t know the Philippines used to be an American colony, and the room is a reminder of that history.

“Most of us in this task force are old,” Abola says. “We’re retired people. We wanted to see this in our lifetime. We started the project in 1998, so that’s 20 years of raising money, and we were not going to wait for another 10 or 20 years.”

Abola and others on the task force say they’ve heard it's not uncommon for heritage communities to run into issues and infighting while creating their Nationality Rooms. But Abola says he's concerned about what the contentious, drawn-out process means for his community.

“To be honest with you, the Nationality Room project caused a really serious split within our community,” Abola says. “It’s going to take a long number of years of healing.”

But is it possible it’s all been worth it?