Vincent Capuano, formerly the executive chef of British-Indian pub Needle & Pin, has returned to his executive position at the same Dormont location. But instead of pub food, he’s serving up traditional French fare.

About a year ago, Needle & Pin transformed into Jean Louis Parisian Bistro. The French eatery operated under the direction of world-renowned chef Gaetano Ascione, who was brought on to serve as a hands-on consultant. (Ascione moved on to open a restaurant in Chicago.) Now, Jean Louis is under the eye of Capuano, who took over for Ascione in the summer of 2019.

This transition was planned from the start; Ascione was brought in as a mentor for Capuano, who had come into his position at Needle & Pin with little fine dining experience.

“It’s great diving in and learning things on your own, but as a chef, it’s just so much quicker standing next to someone, watching them do it, and then taking it over,” says Capuano. “I wanted to grow much more than I had been, and [the restaurant group] approached me about [Ascione] being my mentor.” 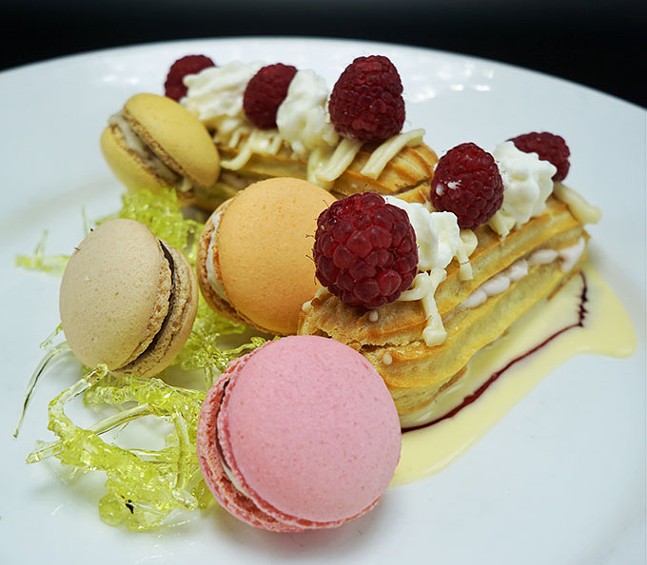 Capuano compares his experience with Ascione to a writer working with a mentor who won the Nobel Prize. “He wasn’t convinced I was qualified enough to work for him,” explains Capuano. “His standard was remarkably high.”

“There’s turbulence,” he says, “because nothing that's highly regarded comes without hard work and strife.” The apprenticeship, though rocky at times, has significantly improved Capuano’s skill set.

One of the most noticeable takeaways from Ascione’s mentorship is how Capuano learned to fuse classical French cuisine with what he loves about Pittsburgh.

Capuano’s understanding of French cuisine is based on the practices of Jean Louis Palladin (the chef who introduced the U.S. to French cuisine and a mentor to Ascione). Palladin’s approach is rooted in the farm-to-table dining, a mindset that Capuano has always incorporated into his cooking. Now, he’s able to articulate it.

“You get a fish that you can look up and say, 'This is the highest quality you can get,'” he explains. “And then you take it out of the box, inspect it, and look to make sure it’s that high quality because you really respect it. And then, you cook it like you love it, because you really do care.”

Since Ascione left Jean Louis, Capuano has changed about half of the menu. It is still built around what Capuano calls “rustic food, done with love.” He’s kept classic French dishes like coq a vin, and onion soup, both items created by Ascione (though now, they lean more toward Capuano’s palate preferences).

Of the items he’s added to the menu, Capuano can pick two that showcase skills he's has learned from Ascione: grilled octopus, which he calls “life-changing,” and scallops covered with pico de gallo.