The Nepali Bazaar, in Brentwood, is a popular shop for Pittsburgh’s growing Bhutanese community 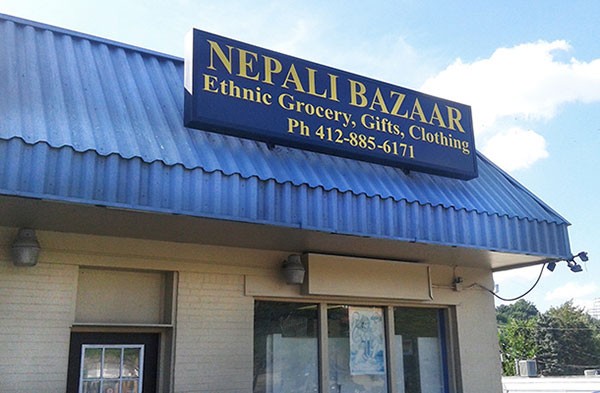 CP photo by Ashley Murray
Brentwood's Nepali Bazaar
4040 Saw Mill Run Blvd., Brentwood.
On Route 51 in Brentwood, Padam Pradhan and his family shopped for groceries — not at the towering Giant Eagle, in Brentwood Towne Square, but at the Nepali Bazaar market directly across the street.
“We are Bhutanese, so they have all the good stuff,” Pradhan, of Whitehall, says. (Nepal, a small country tucked between India and China in the Himalayan Mountains, is where many ethnic Nepali Bhutanese escaped to during violence in the 1990s.)

The market’s shelves are stacked with bags of lentils and spices, and several kinds of flour. There are fresh mangos and pickled mango, fresh coconuts and coconut powder, sweet tamarind and tamarind chutney.

Dishes from Nepal are heavy on rice, lentils, spices and vegetables. For example, one of the most popular Nepali dishes, dal bhat, a thick stew-like lentil mixture over rice, is made with onions, garlic, chili peppers and a variety of spices that often includes turmeric, coriander and cumin, among others.
For Pittsburghers, the Nepali Bazaar, and other Asian restaurants and grocery stores around the city, are a foray into ethnic foods and cultural items. (The store also sells Hindu and Buddhist ceremonial objects.) But Pradhan and his family find the store necessary.

Pittsburgh is a designated location for the U.S. Refugee Resettlement program. About 5,000 ethnic Nepali Bhutanese have been moved here since 2008, mainly in South Hills neighborhoods; hence the market’s Brentwood location. Pradhan spent 21 years in a refugee camp in Nepal before being resettled in Pittsburgh five years ago; until then, his daughters and niece had lived their entire lives in the camp.
As his youngest daughter reaches up to the counter to carry the container of lychee-fruit snacks, Pradhan’s 13-year-old daughter, Sanjita, explains that this is the market her family always comes to, though she admitted they sometimes venture into Giant Eagle. She says she loves school and learning a new language, but still misses home.

“In our dreams we are in Nepal with our family and friends, but when we wake, we’re in Pittsburgh,” she says. Fortunately, there is the Nepali Bazaar for some reminders of home.