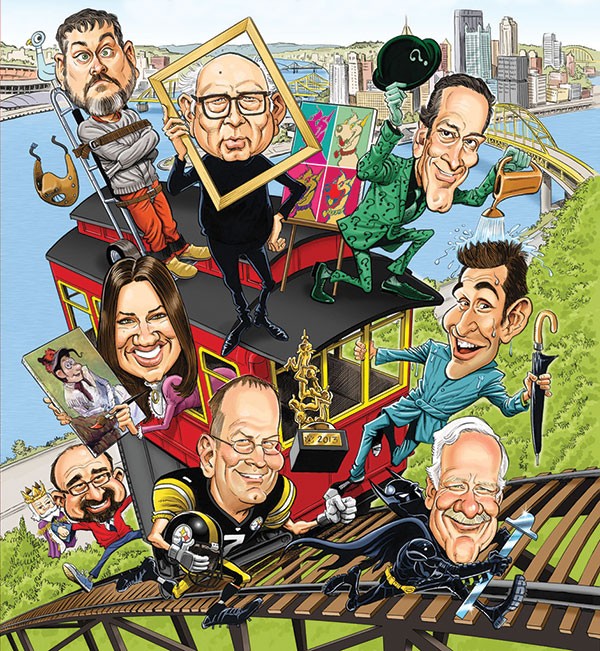 You might figure professional cartoonists would be a wacky bunch, and you might be right. Yet when the annual National Cartoonists Society Conference lands in a town, most locals don't notice, any more than they would any other convention drawing 350 guests.

Sure, there have been charitable initiatives. (Picture cartoonists helping Habitat for Humanity build houses in New Orleans after Hurricane Katrina.) But mostly, these folks are as under-the-radar as their drawings can be over-the-top.

Not so May 23-26, when Pittsburgh gets its first shot at hosting. Thanks to Pittsburgh's ToonSeum, NCS members and their work will be highly visible, from the artists behind strips like "Bizarro" and "Mutts" to Pittsburgh Post-Gazette editorial cartoonist Rob Rogers and Don't Let the Pigeon Drive the Bus author and illustrator Mo Willems.

Most notably, on Sun., May 26, the Pittsburgh Comic Arts Festival will close down a block of Liberty Avenue for costumed characters (Betty Boop, Popeye), live music and autograph and sketch sessions with some 60 artists. There's also a ticketed panel discussion on women in cartooning, featuring Cathy Guisewite ("Cathy"), Lynn Johnston ("For Better or Worse"), Jen Sorensen ("Slowpoke") and others.

Equally enticing for comics fans, on May 23, the ToonSeum opens the first-ever exhibition of winners of the NCS's Reuben Award, cartooning's highest honor. Past winners include Walt Kelly, Charles Schulz and Gary Larson ("The Far Side"). The show includes original art by every winner since 1947 — including, opening weekend only, an original, hand-colored piece by Bill Watterson ("Calvin & Hobbes").

"Even we professionals who are in the business are excited about this [exhibit]," says Richmond by phone from his home in the Minneapolis-St. Paul region.

This year's Reuben will be awarded at a private, black-tie affair on Saturday. So will NCS honors in categories ranging from comic strips and magazine illustrations to editorial cartoons and feature animation.

All the awards are voted on by NCS members. Pittsburgh, a city with its own NCS chapter, boasts seven finalists. "To have that high [a number] for Pittsburgh is really phenomenal," says ToonSeum executive director Joe Wos.

"It's pretty huge" to be nominated for or win an NCS award, says Pittsburgh-based Michael McParlane, a previous winner whose syndicated "Mac" is nominated this year for best short-form online comic.

Still, for all the family-friendly fun this weekend, if you see a cartoonist out partying, don't be too shocked. "These people are chained to a desk 365 days a year in a very solitary job," says Wos. "This is their chance to let loose."