The Musical of Musicals (The Musical!) at Off the Wall 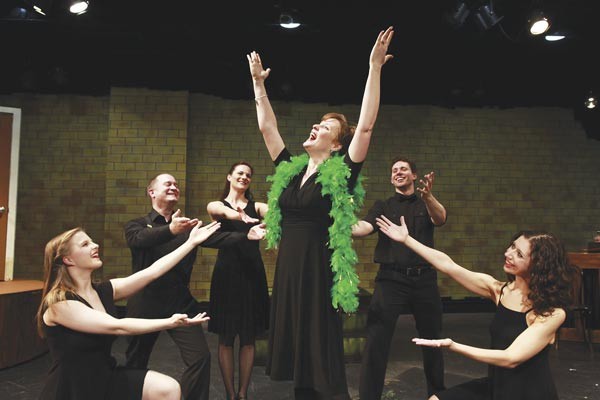 Photo courtesy of Heather Mull
The cast of The Musical of Musicals (The Musical!) at Off the Wall Productions

continues through May 21. Off the Wall Productions at Carnegie Stage, 25 W. Main Street. Carnegie. $25-40. 724-837-3576 or insideoffthewall.com
People who retain incredibly arcane sports statistics always amaze me. In my charmingly smug way I always wonder what sort of empty lives they have. Never mind that I know the replacement cast for the first production of Carousel. Or get into fights about the best Mama Rose: Ethel Merman or Angela Lansbury. And I’m prone to rattle off the lyric differences between the stage version and cast recording of Sweeney Todd.

So The Musicals of Musicals (The Musical)! — now playing at Off the Wall Productions — is my Super Bowl. Eric Rockwell and Joanne Bogart wrote the book, music and lyrics to this 2003 musical comedy that’s a marvelous send-up of musical comedies.

The concept is five versions of the same plot (“You must pay the rent!” “I can’t pay the rent!”), each as if written by Rogers & Hammerstein, Stephen Sondheim, Jerry Herman or Kander & Ebb. There’s genuine wit in the lampooning of the composers’ styles, and the parodies of the lyric writing are clever and knowing. But, really, it’s just an excuse for an avalanche of musical-theater jokes.

Rockwell and Bogart have created a sort of show-biz machine gun, spraying the audience with puns, inside shtick, sight gags, obscure references … There are more jokes per mile in this show than could be inventoried. I, naturally, had a blast.

But not just because of the script. If you put Patti LuPone, Hal Prince, Mary Martin, Stubby Kaye and Audra MacDonald into a microwave for about seven hours, what you’d end up with would be Robyne Parrish and Gavan Pamer, the director and choreographer of this Off the Wall production.

The specificity of their jokes, the lightning-quick referencing — these two explode the material on the stage with their unbounded knowledge of show-business legends and traditions.

Both also appear in the show, along with protean talents Elizabeth Boyke, Elizabeth Flemming, Brittany Graham and Ryan Patrick Kearney, and it’s impossible to overstate how tremendously funny and gloriously loony they all are. And a big tip of the hat to Nancy Gordon Galluzzo, who, miraculously, makes a single piano sound like a great big Broadway orchestra.