The Music Man at Stage 62 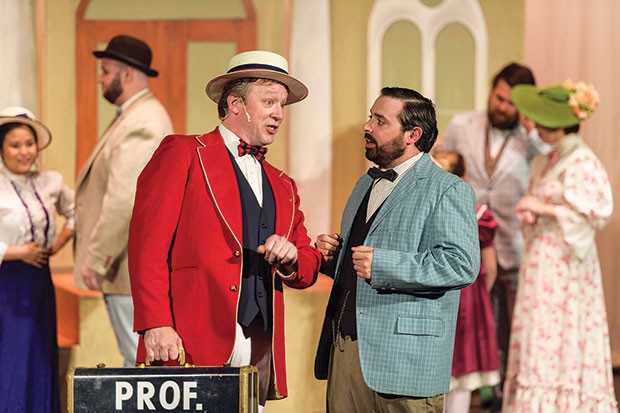 continues through Sat., Nov. 19. Stage 62 Productions at The Andrew Carnegie Free Library and Music Hall, 300 Beechwood Ave, Carnegie. $15-20. 412-429-6262 or stage62.org
After one of the most bruising and bitter elections in modern American history, there’s something truly charming in Stage 62’s production of The Music Man. Some impressive singing and choreography — with a host of talented children — blend with a live band and thrust stage that electrifies the setting.

The audience can’t help being pulled into the innocent playfulness of this classic American musical, happily taken away from the grimy game of politics into the world of 1912’s traveling salesmen and steam locomotives. To a place where credential-less professor Harold Hill (Andy Folmer) affably tries to charm his way into small-town librarian Marian’s (Becca Chenette) heart — a romance that disrupts his own hidden plans of swindling the Iowa town of cash through musical deception.

Meredith Wilson’s romance is best known from the 1962 film, which followed its 1957 Broadway debut. But this production, directed by Rob James, re-engages with the hearty fun of musical theater, bouncing the audience along in its jollity and running gags (and recurring “Ye gods!”). There’s plenty to recognize throughout, such as the classic “Till There Was You” — enjoyably done by Folmer and Chenette — and “The Wells Fargo Wagon,” stolen by an adorable Elliot Bruno, as Winthrop.

Community theater has never been so important nor so threatened with extinction. This production goes above and beyond in terms of ambition: Devyn Brown’s choreography, Michelle Nowakowski’s costuming, and Lynetta Miller and James’ set design create a spectacle rarely found in local theatrics. It’s impressive and enjoyable. Clearly a lot of work has gone into this show.

But nor does it take itself too seriously: The cast are obviously having fun, the young ones swelling with pride (while retaining composure throughout), and the show nods to its roots in that its set design for the library scenes look awfully similar to the venue’s Andrew Carnegie Free Library (fireplace portrait and all). It’s a warm reference to the cherished localism of the production and its place as a classic in many of the cast, crew and audience’s hearts.

Peter and the Starcatcher at Stage 62