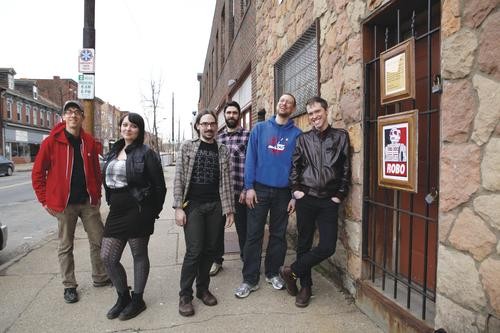 Spread out on the coffee-shop table, the floor plans show a long, thin building -- the future home of the Mr. Roboto Project. Sitting around the designs are several Project board members --Michael Baltzer, Mike Q Roth, Holly Smith and Christopher Schwarzott -- each pointing out the new building's features. A front room, where bands can sell merch. Wheelchair-accessible bathrooms. A large back room for the stage. An upstairs that could be artist workspace.

The original Mr. Roboto Project was formed in Wilkinsburg in 1999, as a DIY venue and community space. Until it closed last February, Roboto maintained a unique niche in Pittsburgh's music scene. Now, after a year on hiatus, Roboto is preparing to reopen its doors in Bloomfield -- and re-examining what it's supposed to be.

While the original Wilkinsburg location "had a unique isolation aspect" that could be positive for a rock venue, says Baltzer, it was out of the way, and difficult to reach by bus. The new Bloomfield location -- at 5106 Penn Ave., just across from Spak Bros. pizza shop -- is already buzzing with venues, galleries and foot traffic attracted to the Penn Avenue arts corridor.

The board settled on its new site, a boarded-up former bar known as Pap's, late last month, with assistance from Rick Swartz, of the Bloomfield-Garfield Corporation.

The new location, says Roboto board member Brian Gruetze, offers new "opportunities for collaboration" with other established organizations in the area. Once a standalone venue, Roboto can now be "part of the community" -- by taking part in events like the monthly Unblurred gallery crawl, for example.

Roboto's interm board of directors -- who include Rachel Courtney, Gruetze and Bret Strawn -- have been tasked for the past year with getting the venue back on its feet. Some board members, like Roth, have been involved with Roboto in one way or another since the very beginning. Others are newer faces, like Schwarzott, who moved to Pittsburgh from Buffalo in the mid-2000s.

Some of the challenges are new as well.

Roboto opened in "a perfect storm," says Baltzer, providing a much-needed service to bands and members who embraced variety and mixed-genre shows. Anyone who became a member -- $25 the first year, then $10 annually -- could book shows at Roboto. That openness encouraged many to start music projects, including Holly Smith, who started going to Roboto shows as a teen, and eventually played in a group called Broken Neck. "Roboto was a big part of why I started to do this," Smith says.

In its early days, Roboto offered a haven for a wide swath of DIY music -- experimental music, solo acts, punk and indie-rock bands -- that didn't fit at more conventional, market-driven venues. But over the years, indie-rock became more mainstream, embraced by 21-and-over venues. New art galleries and other alternative spaces sprang up, including Garfield Artworks, ModernFormations and, more recently, Most-Wanted Fine Art and The Shop (all of which are located within a mile of the new Roboto space). Roboto's musical focus, meanwhile, narrowed to highlight more punk and hardcore.

Combined with the out-of-the-way location and lack of other activity nearby, Roboto's more select appeal meant you needed a good reason to trek out for a show. But with the change in location, the board hopes to foster more diverse programming. The rent on Penn Avenue is higher, Roth points out, so the venue will need to host shows more regularly.

Still, while Roboto is definitely evolving -- along with the rest of Pittsburgh's scene -- there's plenty that won't change. One constant is the board's commitment to bottom-up organizing. While seeking the new venue, the board sought input on the organization's future by posting an online membership survey on robotoproject.info.

"We put all aspects of the old space on the table," says Roth. But after 150 responses, Roboto's membership structure -- with dues-paying members able to program their own events -- will remain essentially the same.

The membership model gives Roboto plenty of flexibility to absorb change, says Gruetze. "I think it speaks to how well it was designed at the outset."

One curious thing about Roboto's current board, in fact, is that none seem to be active in bands at the moment. (Baltzer has a new project in the works.) And perhaps that says something about how a longer-term investment like Roboto allows people to stay connected with a community -- even as their interests may change from playing in bands to looking at floor plans.

The new Roboto looks good on paper -- but then, the future usually does. On Wed., April 13, Roboto holds an open house, inviting former members and curious newcomers to check out the new space and learn about getting involved. Also important, they can see just how much work lies ahead, before any shows can happen -- and hopefully lend a hand.

"It's a little bit of a reality check," says Roth, with a smile.