The Motherfucker With the Hat at barebones productions

When you strip away the dirty words and ratty milieu, the play reveals itself to be a melodrama. 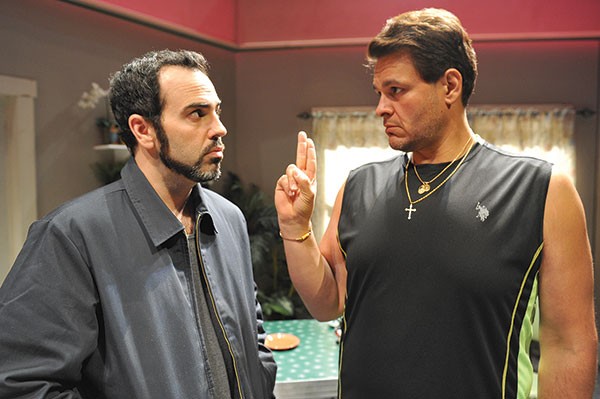 Photo courtesy of Louis Stein.
Patrick Jordan (left) and Leandro Cano in barebones' The Motherfucker With the Hat.

THE MOTHERFUCKER WITH THE HAT

Last year, barebones productions presented Stephen Adly Guirgis' Jesus Hopped the 'A' Train, and the show knocked my socks off. Guirgis' explosive writing was so passionate, and his vision so singular, I couldn't wait to see his then-new Broadway show The Motherfucker with the Hat.

It wasn't a long wait, as barebones now presents Motherfucker. This time we hop-skip around New York City with Jackie, a recently paroled drug-dealer now working on his AA sobriety ... 12 steps that his substance-abusing girlfriend, Veronica, is not inclined to take. A suspicion she may have cheated on him leads Jackie to enlist the help of his AA sponsor, Ralph D. ... and a few other assorted characters.

As directed by Rich Keitel, and opening with a scene of lethal toxicity thanks to Ruth Gamble (as Veronica) and Patrick Jordan (as Jackie), this barebones production starts with an H-bomb bang. Corrosive, profane, darkly funny — this was the writing I first heard in Jesus.

But then the play begins to change. The intensity drops, the radioactive personalities of the characters soften and lots of plot starts bubbling up. None of that's bad. But where we end up is completely different from where we began.

As it turns out, Guirgis is a sentimentalist obsessed with love. And when you strip away the dirty words and ratty milieu, the play reveals itself to be a melodrama; all the villain needs is a mustache to twirl. Again, not a bad thing, but a little surprising from something titled The Motherfucker With the Hat.

On Douglas McDermott's very clever set, Leandro Cano finds lots of humor and honesty in the role of Jackie's cousin, Julio. Edwin Lee Gibson's decision to underplay Ralph is perfect for the first half of the show, but comes up a little short in the payoff. Playing Ralph's wife, Daina Michelle Griffith is, as usual, a fascinating actress — here handling a role which is Guirgis' weakest device.

The irony of the show is that the people who would most appreciate Guirgis' somewhat mawkish story will be the least likely to see it.