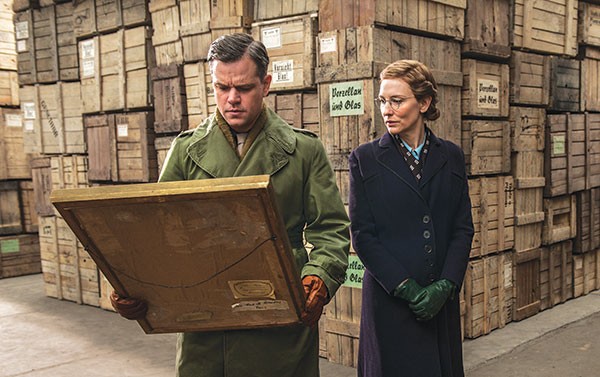 Art is often among the casualties of war, whether the destruction is willful or collateral. And so it was during World War II, when much of Europe — with its vast repositories of public and private art — was a battlefield. Then there were the Nazis, who valued classical art enough to loot it on a massive scale.

How some of this endangered art was saved and located is the focus of George Clooney's dramedy, The Monuments Men. Set in 1944, it takes a fairly leisurely spin in which a specially tasked group of U.S. soldiers try to locate lost artwork before it is lost to the chaos of the war's wind-down. (The story is based on real events, also covered in the 2007 documentary The Rape of Europa.)

Despite a death or two, Monuments feels more like a low-key caper, with the horrors of war a distant background; it's enjoyable enough, but there are few surprises — either because you know your history, or because the story hits every expected beat. It's buoyed almost entirely by its crowd-pleasing cast, in which each actor furnishes a signature performance: dapper Clooney, capable Matt Damon, sharp Cate Blanchett, and deadpan comic-reliefers John Goodman, Bill Murray and Bob Balaban. Even our Allies are familiar souls: Frenchman Jean Dujardin (The Artist) and for the British, Hugh Bonneville, of Downton Abbey