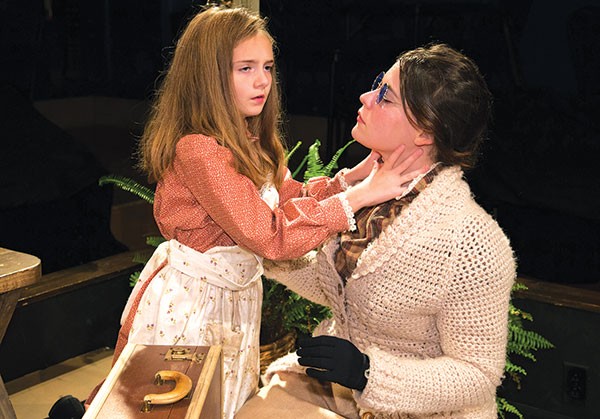 After last week's election, I needed a good cry. So it's kismet that Little Lake Theatre would be presenting The Miracle Worker — William Gibson's warhorse about Helen Keller and her teacher, Anne Sullivan. This show which never fails to tear me up.

An attack of scarlet fever before her second birthday left Keller deaf and blind. Over the next several years, her parents indulged every whim, and by 7 she was an id-fueled hellion.

Sullivan was hired by the Kellers to reach the Helen "trapped" inside her silent darkness. Both teacher and pupil were creatures of intense willfulness, and their battle makes up the bulk of the evening. When the literal and figurative floodgates open for Helen in the play's legendary climax ... well, you-know-who is usually bawling in his seat.

The most amazing aspect of Gibson's play is that he had the guts to write it. Guts, or sheer stupidity. What playwright would ever be brave enough to create a piece of theater in which the lead character has no language and no direct means of connecting with the audience, and is a brimming pot of undisciplined fury ... oh, and by the way, who needs to be played adolescent child?

It's a role beyond the range of most seasoned actors, so that Little Lake found 9-year-old Madeline Dalesio is its own miracle. She's got the force and passion in spades, but what I particularly enjoyed were her small reactions when Helen isn't the focal point of the scene; reading her face you get a glimpse into the remote world where Helen lives and where Dalesio has set up residence.

Abigail Lis-Perlis is a ferocious Anne, pursed relentlessly by a tragic past and confronting an impossible future; Lis-Perlis has no trouble showing us the emotional cost of such a life.

Jena Oberg's direction is focused on the high-stakes drama and titanic personalities; Bill Crean, Stacey Rosleck and Jeff Johnston play additional — and additionally — strong-willed Kellers. Though a bit more subtlety and a considerably less-cluttered game plan would help, this is a quite effective production ... I cried at the end, and not just because of Mitch McConnell.