The Mexican War Streets gets a new coffeehouse

Commonplace Coffee is the neighborhood’s first in two years 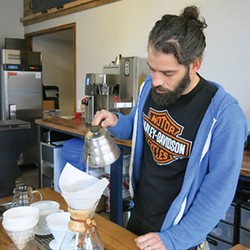 As a neighborhood with a close-knit layout and sociable residents, the Mexican War Streets is a natural fit for a coffeehouse. Yet the community had gone without since Buena Vista Coffee closed, in mid-2014. Adjoining neighborhoods like Allegheny West had gone even longer.

That changed Dec. 2, when Commonplace Coffeehouse opened its fourth Pittsburgh location in the corner storefront previously occupied by Buena Vista (and before that by Beleza Community Coffeehouse).

If this past Friday was any indication, things are off to a good start. Manager Frank Battista and another barista were dishing out coffee drinks and baked goods (like luscious blueberry muffins) to patrons who already include regulars.

Battista is one of the forces behind the shop. The bearded 10-year-veteran of the local java trade — who lives a block away, with his wife — worked with Commonplace co-owner T.J. Fairchild, building-owner Ryan Costello and Essig Renovation & Design to maximize table space and exploit the big street-level windows.

The store’s day-long grand opening, this Sat., Jan. 16, is community-minded too: Bring a potluck contribution and get a free cappuccino.