The Mattress Factory's latest Gestures goes in every direction. 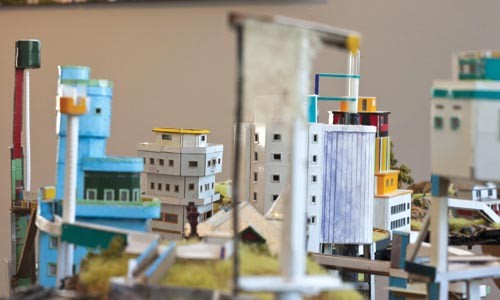 The 14th installment of the Mattress Factory's Gestures series is characteristically diverse. Much of the work in this showcase for local artists is either flat or contained, which of course doesn't embody the museum's installation-focused "art you can get into" mandate. However, the exhibition, curated by Katherine Talcott, approaches its space on the Factory's fourth floor creatively and attains a smooth momentum.

The work of Valerie Lueth and Paul Roden, a.k.a. Tugboat Print Shop, covers a dozen or so linear feet of wall-space visible immediately as you exit the elevator. It's taken mostly from Tugboat's "Deep Blue Sea" series, and there are a lot of sea creatures done in an anatomically studious but technically stylized hand, along with waves or currents that curl into patterns and arabesques. I have friends who complain about the overabundance of "Pittsburgh animal drawing," but in Tugboat's work, the creatures seem like natural relations to tight composition and deft coloration.

Nearby, Connie Merriman's installation "Tree House" is neatly highlighted by light from a nearby window. The title is wordplay: This tree is the occupant, rather than the ersatz foundation, a synthetic pine seemingly held upright by a robust pile of mulch. It's bounded by four white-paper walls that are suspended by wooden slats. The delicacy and translucency of the structure -- which allows the viewer to see inside through a few courteously placed windows -- undermine its designation as "house." As a piece, "Tree House" doesn't readily betray what it's doing in a museum space -- nature-conscious minimalism? minimalism-inflected naturalism? Dadaist subterfuge? -- so viewers might enjoy taking a few interpretative swings at it.

Ryder Henry's "Periphery" takes up that much of your optical range and more. The work includes painting that looks like concept illustrations of an advanced but blasé future, and sculptures that could be the models for the plans to make that future happen. Suggestions of orbital space-colonies and portable greenhouses recur, but everything is a little tarnished and soggy. In the shiny plastic future, the seams aren't supposed to show; the fact that Henry's do, without any heavy-handed homages to Orwell or Dick, makes the piece more a vivid metaphor for falling short of the dream.

The somewhat unorthodox nature of the Mattress Factory's gallery space, along with the recent warmer weather, are exploited in Dee Briggs "Parasitic Reflectivity in a 90º Two-Step." I'm going out on a limb to assume that the "90º Two-Step" refers to the positioning of two individual steel sculptures, one nestled inside the space among other work, the other bolted to the brick and aluminum of the fourth-floor catwalk. The sculptures are similar (perhaps identical) assemblies of gently curved steel, riveted and hinged. Loyal to the importance of the third dimension, they attend carefully to every potential viewpoint. What's more, you don't expect them to come in a pair, and seeing two like pieces equally comfortable in two different habitats was an intriguing surprise.

Additionally, Danny Bracken composes a mellow audio-visual meditation, and Robert Villamagna covers a wall in cacophonous trash avatars of frustration and doubt. Mary Mazziotti employs a carnival cliché (the human-sized cartoon framing the viewer's face and hands) with a macabre twist. Paul Schifino sits the viewer down opposite a spastic video. And Ben Schachter overlays physical cityscapes with drawn ones. Larkin Werner converts signage into a sunny day; and Heather Pinson and Matthew Conboy illustrate the spatial extension of a dance routine.

Gestures 14 is an egalitarian effort. These works set side by side vary considerably in medium, size, legibility and, naturally, aesthetic appeal. They are, however, competently integrated into the space, and into concert with one another. The subtle, running discourse that evolves from a successful exhibition is definitely present, and anybody who gets into thoughtful work ought to be able to get into that.