The Mattress Factory's exhibit of recent work by Thaddeus Mosley is a sculptural epic. 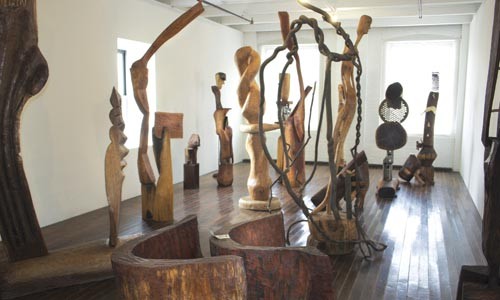 There is an easy harmony between the Mattress Factory's white-washed brick walls and the richly oiled, wood-and-metal totems comprising Thaddeus Mosley: Sculpture (Studio/Home).

The fourth-floor gallery housing the exhibit possesses the spare beauty of a studio space, suggesting the proximity of the artist himself. The impression is reinforced by the sounds of jazz and conversational voices emanating from the floor below. The atmosphere makes the show a living essay on the Pittsburgh-based artist's creative world.

Mosley's sculptures have talismanic power. Larger-than-life and shaped to some degree by jazz, they recall, in three dimensions, the work of modernist painter Stuart Davis. There are also elements of Brancusi and the rough-hewn quality of African tribal totems and fetishes. Many of the works, though securely jointed, seemingly defy gravity.

Mosley professes to have found magic in African tribal art, turning to it as early as the 1940s to achieve the organic vitality of his works. He also acknowledges an affinity for Isamu Noguchi, whose sculpture similarly attempts to reconnect with the artist's ethnic heritage. Combine these stylistic elements with Mosley's professed love of John Coltrane's improvisational music, and the foundation for his singular artistic spirit is illuminated.

A self-taught sculptor, Mosley studied English at the University of Pittsburgh. For much of his life, he supported his family as a postman, sculpting during off-hours and exhibiting locally. His first solo show was at the Carnegie Museum, in 1968. In 1979, he was named Artist of the Year by the Pittsburgh Center for the Arts, and he returned to the Carnegie for a retrospective in 1997.

The Mattress Factory picks up approximately where that retrospective concluded, charting the productive period following his 1992 retirement from the Postal Service. With the exception of 1975's cherry-sycamore "Metamorphosis," the displayed works were all sculpted after 1994.

Mosley acquires much of his carving material from the city's Forestry Division tree surgeons. Limestone, like that used in the mixed-media works "Columns" (1995) and "Propelled Simulation" (2001), comes from buildings scheduled for demolition. Mosley revels in the naturally occurring details of his media. In his carved-walnut "City Totem" (2008), for example, a knot resembles an eye, making the sculpture vaguely avian. In many of his works, graining is an opulent pattern that works in accord with tactically hewn gouges.

Like Coltrane himself, Mosley improvises, working spontaneously with hammer and chisel. Yet for all their attention to form, some works bear metaphorical significance. Witness "Woman in the Vines" (2006), where a Giacometti-thin female stands alone inside a cage of slender, tightly tangled branches. Every vine seems partnered, while she stands alone. Here, Mosley approaches Giacometti's sense of isolation and confinement.

The source of the music and voices audible on the fourth floor is revealed on the third: A looped video interview with Mosley, conducted by Heinz History Center curator Samuel Black, is projected over a symbolic mound of wood chips. A long wall of collaged gallery fliers -- Mosley's idiosyncratic wallpaper -- preface an interactive panoramic projection of the artist's nearby Sherman Avenue sitting room. Elements from his basement studio line two walls opposite the projection. Empty wine carboys, metal stakes, neatly stacked tools and paper ephemera provide glimpses of Mosley's immediate environment.

Perhaps this is the most revealing part of the exhibition -- more illuminating than any discussion about influences. With help from Mattress Factory co-directors Barbara Luderowski and Michael Olijnyk, Mosley has reconstructed the artist's material context. And from these seemingly prosaic minutiae, the visitor can discern a more candid portrait of the artist, his technical interests and aesthetic preoccupations, than can be sifted from a dozen carefully written profiles. The Mattress Factory presents a researcher's goldmine.