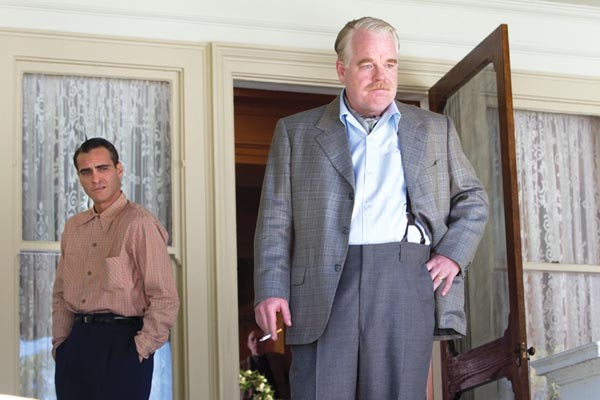 In 1950, a troubled World War II vet named Freddie Quell (Joaquin Phoenix) stumbles (literally) into the world of Lancaster Dodd (Philip Seymour Hoffman), who leads a quasi-spiritual, self-help group known as The Cause. Freddie becomes an acolyte-slash-gofer-slash-drinking-buddy for Dodd, and the pair's complicated relationship forms the spine of Paul Thomas Anderson's The Master.

Despite several searing scenes (Phoenix and Hoffman go head-to-head quite marvelously), The Master doesn't seek to connect to viewers through emotion, or through narrative. What little plot there is occurs in disconnected bursts, and coherency is further complicated by an unreliable narrator and murky distinctions between memories, reality and delusions.

Its pleasures are more cerebral. On a technical level, The Master is a gorgeous piece of cinema, shot in 70 mm and rich with period details. And if you're partial to open-ended ruminating, Anderson offers plenty of intriguing starting points: the tension between wanting to be free and wanting to be led; the pull between the feral and intellectual sides of man; the appeal of cults, as well as their inherent hollowness; the shifting power dynamic of the father-son relationship; and what benefits, if any, result from intense self-analysis.

Though the film winds up in England, there's something inherently American about The Master, its wide-open physical spaces both pregnant with possibility and terrifyingly empty. Here, Quell (and perhaps Dodd, though his quest is likely more craven and self-serving) searches for meaning. But Anderson suggests mid-century America, with all its openness, is no place to look for answers — especially if you're not sure what you're seeking.