Brushed up on your SAT analogy skills lately? Here's an easy one for you: As Primanti's is to Pittsburgh, so is The Maple Restaurant to Ambridge. The Maple's signature hot beef sandwich is so popular that the restaurant won first place in the 2006 Beef Backer Competition, an award given by the PA Beef Council to restaurants that create and market exemplary beef dishes. To be perfectly honest, we don't follow the Beef Backer Competition closely, so we don't know precisely what the criteria are. But it seems that the 12 tons of beef that The Maple roasts and serves every year were a major component of its victory.

As we made our way to Ambridge, this was all we knew; we weren't even sure whether to expect fanciness or folksiness. It turned out that blue jeans were perfectly appropriate attire, particularly the kind with an elastic waistband to accommodate near-inevitable stuffing of the gut. A local fixture since 1963, The Maple is an unreformed, old-school diner, complete with random faux-stone walls, Greek-key paper placemats and a circa-1970 cigarette machine up front, sitting below the framed photographs of a formerly bustling downtown Ambridge.

For all the talk about the beef, the menu itself offers much of what you'd expect from a diner, with high-low juxtapositions like broiled fish and steak alongside tuna melts and burgers. The hallowed hot beef itself is nothing more than that hash-house staple, an open-faced roast beef with gravy.

Well, that and everything more. First of all, it's not open-faced; it's a pile of meat so formidable it crushes the bottom slice of soft white bread while a second slice rests atop. The standard preparation features gravy "all over," including on the potatoes, and Jason wouldn't have it any other way. Offered French fries, home fries or mashed potatoes, he chose French fries, which were superb. Instead of the ubiquitous, often-mealy "hand cut" style, these were classic golden fries, a bit thicker than shoestring-style, but perfectly crisp on the outside and fluffy within. Some were even sturdy enough to hold up to the homemade gravy, which was good, but not extraordinary.

What did justify all the hype was the beef itself. While diner beef frequently tends towards toughness, brownness and a tinny flavor, The Maple avoids all of these pitfalls, serving up delicious roast beef that tastes like Sunday dinner at Grandma's. The slices are thick and tender, a little bit rosy, and thoroughly beefy. Jason cleaned his plate, down to the last drop of gravy.

Angelique took her beef in the form of a cheesesteak, known on the menu as Bob's Special. The sliced sirloin was tender and flavorful, with a suggestion of tangy marinade, and accompanied by enough sautéed peppers and onions to fill, but not overfill, the sandwich. But the veggies were perhaps a little too soft to add all the flavor and texture that they should, and the cheese -- two slices of mozzarella whose square shapes adhered to the underside of the bun -- was not quite plentiful enough to melt into and over the other ingredients. The bun itself was more of the soft white variety and would have benefited from a good toasting.

When we strayed from beef, we were let down. The fish on the fried-fish sandwich was breaded, not battered, which was a nice change of pace. But the breading was unconscionably salty -- neither tartar nor cocktail sauces could mask its saline flavor, and any hint of other seasoning was lost. Further, the fish itself wasn't especially flaky or moist.

We recovered from this disappointment with dessert. At The Maple, this consists of simple pleasures, such as homemade pies and ice cream sundaes.

To be fair, The Maple has an extensive menu which we did not have the opportunity to explore, but the fish and bread products we tried failed to inspire us to recommend them to non-red-meat-eaters. If you're a meat aficionado, though, don't just ask "Where's the beef?" Go to Ambridge and see for yourself. 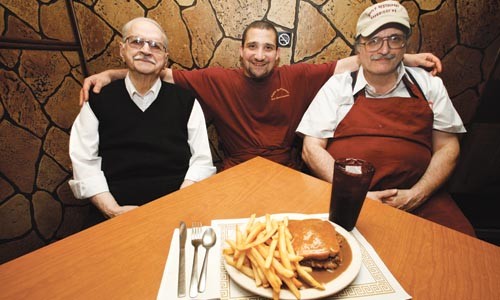