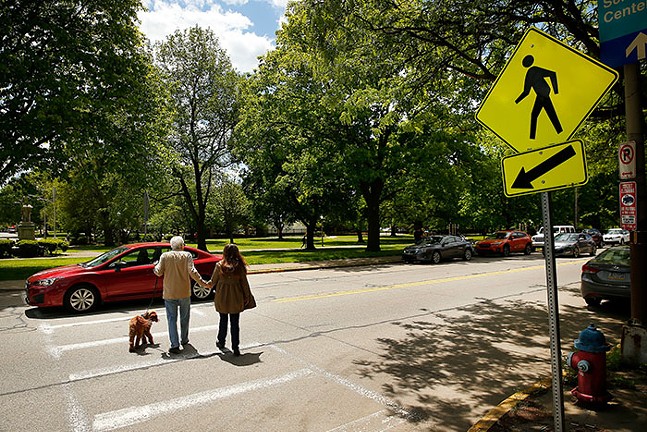 CP Photo: Jared Wickerham
A driver failing to stop as a couple and their dog walk at a crosswalk at Sherman Avenue near the Mexican War Streets in the North Side on Thu., May 13, 2021.
The green scape is so inviting, my father describes it as Pittsburgh’s Central Park. The long park from Brighton to Cedar with several names: West Park, Allegheny Commons, North Park — I just call it Our Park, “our” being the North Siders who walk themselves, their kids, or their dogs on the tree-lined pathways capped at one end with the beautiful Lake Elizabeth and the other side with the relatively new fountain near Allegheny General Hospital.

As I stand only a few yards away from the park, I marvel at how lucky I am to live so close to this gem.

And then I attempt to cross the street.

There is a painted crosswalk. There are yellow caution signs indicating that a driver should “yield” to pedestrians, yield to me. I wait. And wait.

Sometimes, for fun, I pull out my phone and videotape the vehicles who do not stop.

I have many video-taped private vehicles who do not yield, but also Port Authority buses, public safety (?!) vehicles, and, of course, police cars. Sometimes I think the ambulances that do not have lights and sirens on, so therefore do not seem to be en route to or from an emergency, are looking for customers. How else to explain their reckless driving? And yes, no stopping for pedestrians who are clearly attempting to cross is reckless and illegal.

Sometimes, not very often, but sometimes, a car does stop. One time, a car stopped as they should for me to cross. The driver behind the car who was following state law was so angry that he turned down the street that I was walking, followed me down the street, yelling at me. I had on my headphones so I have no idea what he said, but my neighbors who were sitting out on their stoop (North Siders, I love you) yelled back at them (Really, I love you, North Side).

You would think, you would hope, that crossing at an actual light would help the situation. It does not. Especially not at North Avenue and Federal Street. A crosswalk so uncomfortable that people have created their own walkway through the park and in the middle of the street on Federal, closer to Allegheny Commons. It was so well-trodden that it is now an official crosswalk with zebra stripes. This is the people-centered built environmental design, thank you.

But back to North Avenue and Federal proper. Crossing it to me feels like, well … have you ever seen images of the wildebeest in the Maasai Mara in Kenya, crossing that river gorge, and there are crocodiles just waiting to grab their throats and rip them down into the current of the Mara River? Well, that is how it feels like to cross North Avenue and Federal Street. 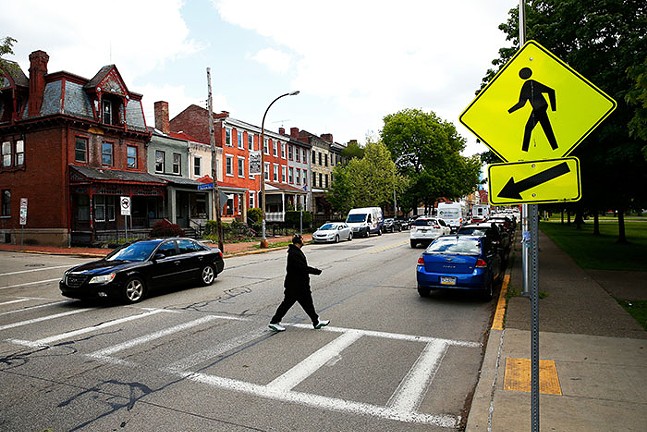 CP Photo: Jared Wickerham
A man crosses a crosswalk at Sherman Avenue near the Mexican War Streets in the North Side on Thu., May 13, 2021.
If you are at the north-west corner and you get the green light to cross, you think you’re good to go, but that is more of an “if” then a “for sure, go ‘head, young buck.” You see, in addition to cars coming from the east, who just jump on that right turn real quick before anyone else moves, there are also the cars coming from the west, who have been playing Jedi mind tricks or just Jedi mind melds (OK Vulcan, I know) deciding if they can do a horrible, illegal, dangerous but perfectly acceptable Pittsburgh Left. Now, even though the drivers have been in non-verbal commutation to see if this vehicle will make a Pittsburgh Left, the one factor not considered is you, little baby wildebeest, trying to innocently and legally cross the street when the — well now, this is the amazing part — when the light turns green.

So you have to dodge the car making the Pittsburgh Left, rush past the car doing that quick right turn, and hope that the bus stopping at the bus stop that is inextricably right near that corner doesn’t stop short and block the crosswalk so you can pass safely.

It is so much to do when all you want to do is sit in a beautiful park, enjoy that green space, that beautiful lake with the views of downtown Pittsburgh. To soak in that peace and beauty, maybe sit and read a book. Although one thing about West Park/Allegheny Commons/North Park, there aren’t many places to sit, but that is for another column ...