Think of a sound somewhere between Slint and Sleep 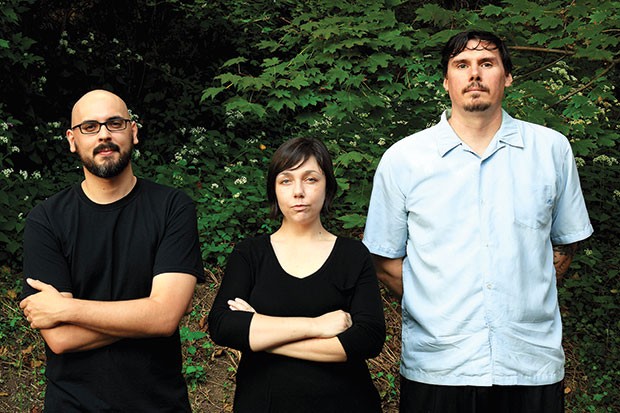 Photo courtesy of Trevor Richards
The Long Hunt
Nature figures heavily in Wilderness Tales, the debut album from post-rock trio The Long Hunt. The songs are instrumental — there are no lyrics about wind whistling through leaves — but nature references are abundant. There’s a deer head on the cover (not a real deer, it’s papier mâché), the song titles are outdoor-centric, and the inside cover art shows the band’s instruments lying in the grass like sleepy poets.

“A lot of music is focused on the city, industry, that kind of urban thing,” says Trevor Richards, the guitarist and principal songwriter behind The Long Hunt. “I wanted to try to bring it back to the natural atmosphere.”

That might sound like a sorta thin connection, but the Pittsburgh-based band’s style of heavy, repetitive, minimally stylized music does have an organic, animalistic vibe to it. This isn’t the music of lily pads and fawns sipping from streams. Wilderness Tales channels the punitive, indifferent randomness of floods and wildfires.

Sometimes the nature influence is a little more direct, like when Richards was camping at the Colorado National Monument in Grand Junction, Colo., last year, woke up and wrote “Valley of the Sun” in a matter of hours. (To be fair, that phrase usually refers to Phoenix, Ariz., but he felt it was a good fit nonetheless.) It’s easily one of the album’s highlights.

The Long Hunt started nine months ago, closing out Richards’ three-year hiatus from music performance. Previously, he’d played in the avant-garde progressive-rock band Eighth Whale, which fizzled out after a few albums in 2014. During his time away from music, Richards grew to love minimalism and repetition in music (Eighth Whale’s approach was decidedly not minimal). Minimalism — in production, instrumentation and composition — seems to be the ruling ideology on Wilderness Tales.

The trio, which features bassist Allison Kacmar Richards (who is married to Trevor) and drummer Mark Lyons, succeeds with its sound because every minimalist instinct is balanced by jolts of grandiosity and abrupt change. The sound is unpredictable. Think something between Sleep and Slint: unsettling, heavy and mesmerizing.

Wilderness Tales is out on Feb. 17 and available at www.thelonghunt.bandcamp.com/album/wilderness-tales