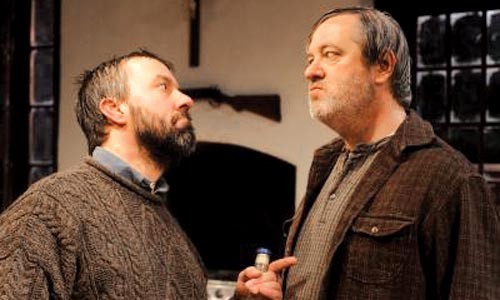 Coleman and Valene are brothers and roommates, but they are also virulent enemies. They use any excuse to fight -- as in fistfight -- but some particularly sore spots are: (a) money; (b) moonshine; and (c) little Virgin Mary figurines.

The Lonesome West, by Irish playwright Martin McDonagh, is the ultimate sibling brawl, but the play also serves as a nihilistic vision of Ireland. Not the hip literary world of Dublin, but the gossipy, windswept town of Leenane, where the two major pastimes are drinking and suicide.

The Playhouse REP presents a rollicking rendition of West, complete with onstage shotgun blasts and fluent Celtic accents. David Cabot and Philip Winters play the bickering brothers, and they seem to relish their roles as petty, self-serving bastards. Despite some cartoonish transitions, the acting is a joy to watch -- exactly what we've come to expect from Point Park's Equity troupe.

But the real winner here is Dave Droxler, as Father Welsh. Welsh is the hapless priest of Leenane, the village's unheard voice of reason. Welsh would do anything to save the brothers' souls, but even martyrdom may fall short. Droxler juggles two Father Welshes -- the bumbling drunk who just wants everybody to get along, and the depressive Catholic who would risk Hell for a little redemption. There is the funny, and there is the sad ... and Droxler finds the tortured man in between.

If you can digest the toxic relationships and easy sadomasochism, McDonagh is an easy playwright to love. Actors clamor for his plays because they keep the audience guessing. Did Coleman blow his father's head off with a shotgun by accident, or was it willful? And either way, mightn't he have enjoyed it? McDonagh's characters are walking, talking ids. They are not "likeable," but in a medium too often suffocated by likeable characters, these roustabouts are a breath of fresh air.

Kim Martin directs a tight show, and Lindsey B. Mayer's set is a masterpiece of old-world aesthetic -- the cupboards and stonework seem to molder before our eyes. After some smashing local productions of his The Pillowman and The Lieutenant of Inishmore, McDonagh has a small legion of Pittsburgh fans, and they will be pleased. Right pleased.