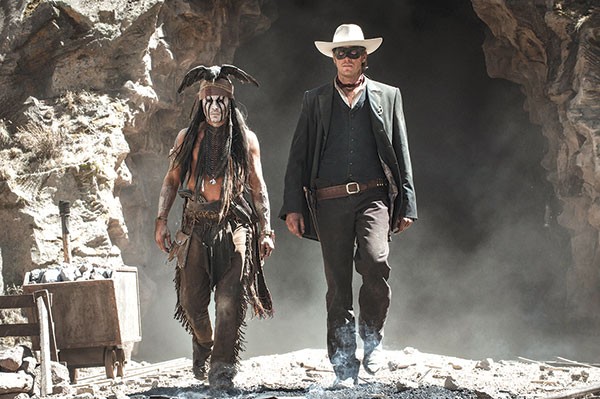 Who are these masked men? Tonto (Johnny Depp) and the Lone Ranger (Armie Hammer)

There are those who find Johnny Depp's cartoonish, heavily made-up pantomimes an amusing and welcome addition to a remake, and those who don't. Depp's latest round of bewigged mannerisms in The Lone Ranger is sure to put even more daylight between the two camps.

Gore Verbinski's reboot — which, at 150 minutes, takes almost as long as it took to win the West — is an origin story for the masked hero (Armie Hammer) and his Comanche partner, Tonto, as they join forces to address a checklist of issues. These include: Tonto's vengeance for a long-ago "bad trade"; capturing the outlaw who killed the Ranger's brother; throwing a wrench iton the expansion of the transcontinental railway; rescuing the perennially imperiled woman and child; and setting up a new movie franchise devoted to the continuing adventures of the Lone Ranger and Tonto.

This is a Disney movie, produced by cinematic-mayhem master Jerry Bruckheimer for maximum megaplex impact, so it's as bloated and formulaic as you'd expect. (Wrecks-and-effects count: three train derailments and four explosions.) Which brings us back to Depp, who plays — and I do mean plays — Tonto. Excusing the cannibalistic villain, Depp's Tonto is the twist designed to juice up this golden oldie.

And here's where things get odd. Without Depp, you have a fair old-school Western, with a dashing hero, a pair of bad guys — one grubby and violent (William Fichtner), the other unctuous and urbane (Tom Wilkinson) — some kicky action scenes, a laugh or two, and magnificent Southwest scenery.

But that's presumably not entertaining enough for today's post-ironic audiences, and thus Depp (who's also an executive producer) jumps in, indulging his full range of patented shtick. Here's a white guy with mud on his face playing an Indian; he's got Jack Sparrow's hairdo and a dead bird on his head. (You will never ever stop staring at this bird.) Add a random pidgin-English accent, a mincing walk, much eye-rolling and mugging, and it's ... Johnny Depp. Some will love it; others, like myself who are weary of Depp's similar characters, will find Tonto/Depp a constant distraction.

Thus, The Lone Ranger is a matinee-style Western into which a preening Johnny Depp has inserted himself. (Depp plays a second, even more made-up role, in the film's incomprehensible framing device, in which a super-old Tonto comes to life in a carnival diorama labeled "The Noble Savage." It's in the running for the worst scene of 2013.)