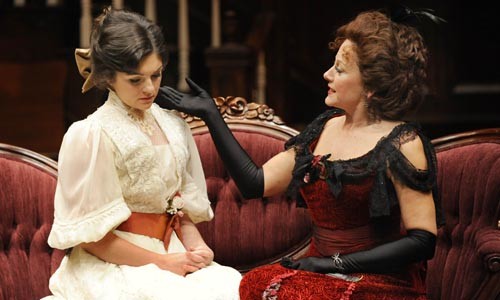 Lillian Hellman was a piece of work who spent of lot of time causing trouble for friends and enemies alike. In the literary world of the mid-20th century, you weren't anybody unless you were feuding with Hellman.

She managed to put a lot of conflict on stage as well ... especially in her most famous play, The Little Foxes, now at the Pittsburgh Public Theater.

It's an old-fashioned Southern gothic about a family of incredibly awful people (Ben and Oscar Hubbard and their sister Regina) who break the backs of everyone around them for money ... or for sport.

While her brothers have the freedom to exploit at will, Regina -- chafing under the gender restraints of the time -- must shield her claws from prying eyes. That churning battle between her blood lust and her "high-toned" manners is a huge part of what fuels Little Foxes. After all, Hellman based Regina on an aunt who went horseback riding on the day of her husband's funeral.

Tallulah Bankhead's performance in the original 1939 production is theatrical legend, and Bette Davis starred in the film version, directed by William Wyler. Davis and Wyler were tumultuous off-screen lovers, but their biggest fights were over Little Foxes: Davis wanted the sets and costumes to be "shabby genteel," motivating Regina's need for money. But Wyler wouldn't give in: The Hubbards were rapacious simply because they were, and Hellman's text didn't support any other reading. The film got made, but it ended their relationship.

What's that got to do with this production? Well, somebody at the Public would have sided with Davis, because this Regina is a lost lamb who becomes evil only after events force her hand. Such a choice throws the entire first act out of whack: The theatrical glory of Little Foxes is watching Regina manipulate the men around her, but when characters refer to Regina's childhood venality here, it doesn't make any sense.

By the second act, when Helena Ruoti finally flies her fierce flag and moves in for Regina's kill, things get a lot better ... especially when played on James Noone's gorgeous set, and against Deirdre Madigan's moving performance as Birdie. And while there are highly questionable aspects of this play (the racial stereotypes are breathtaking), nobody could structure a potboiler like Hellman. When she, Ruoti and director Ted Pappas throw off their restraint, Little Foxes boils over.