And so The Lion King has roared back into Pittsburgh, becoming quite the mane event. And with good reason. Julie Taymor's world-touring musical take on the animated Disney cartoon bursts with more pride than can be found in any lion's den. The show's stars are the production values (this is good, and in no way denigrates the human cast): elaborate costumes, stunning lighting and, of course, larger-than-life puppets that take The Lion King to a level several paws above all other musicals. Let those shows go live on Avenue Q.

The Lion King tells the tale of energetic lion cub Simba, who leaves Pride Rock for voluntary exile after coming to believe that he is responsible for the death of his father, Lion King Mufasa -- a death actually caused by the plotting of Simba's nefarious Uncle Scar. Simba meets Timon, a sharp-tongued meerkat, and a flatulent warthog named Pumbaa, both of whom befriend the befuddled cub and instill in him their life philosophy: "Hakuna matata" (no worries).

This is Disney, so there's a sweet love story and a most glorious happy ending. When Simba realizes that he has become the embodiment of his father, he returns to Pride Rock, defeats Scar and becomes the rightful Lion King. Music swells. Curtain falls.

But it's the work that happens before the curtain rises -- and between Acts I and II -- that keeps the young and young-at-heart riveted to their plush seats. Taymor's genius lies in her vision, her approach to transforming cartoon characters into fully realized (read: believable) beasts. This is accomplished through her costume design and (in collaboration with co-designer Michael Curry) innovative, imaginative puppeteering and
wildly creative masks.

The animals of the African plains come together: long-reached giraffes, prancing birds, hopping hyenas, a lumbering pachyderm, leaping antelopes, chugging cheetahs, grazing gazelles ... all brought to life by the people who inhabit their characters and their costumes so seamlessly that they blend into the batik background, leaving behind only the impression of a wild kingdom. Or an explosion at Pier One.

Roger Allers and Irene Mecchi, who wrote the show's book, keep close to the film's heart, but refuse to carbon-copy it. Their book enriches the original story with an earth-toned amalgam of song, dance, fairy-tale flavor and vaudevillian humor. Some of it is too corny (lots of fart jokes; a poke at Target; even a dig at Disney's "It's a Small World"). But Garth Fagan's choreography is mesmerizing, even if the interpretive dance number seems out of place. (What is this supposed to be ... art?)

What works, again and again, are the visual effects. The orange paper sun, the snapping gators, the savannah grass rising from the stage, the stampeding wildebeest, the waterfall, the elephant graveyard, the yards of cloth that become a stream. And while Taymor may have her vision indelibly stamped all over the show, set-designer Richard Hudson must get more than a mere nod for his magical pop-ups.

There's no denying that The Lion King will please (almost) everyone. He is Lion, hear Him roar. 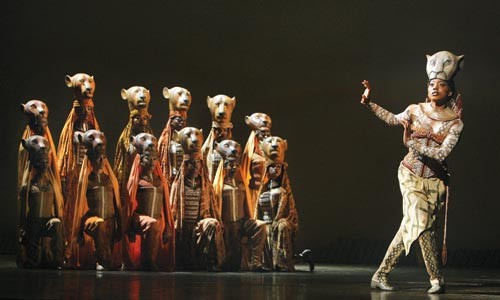 Pride goeth before an audience: the lionesses in The Lion King. Photo courtesy of Joan Marcus.