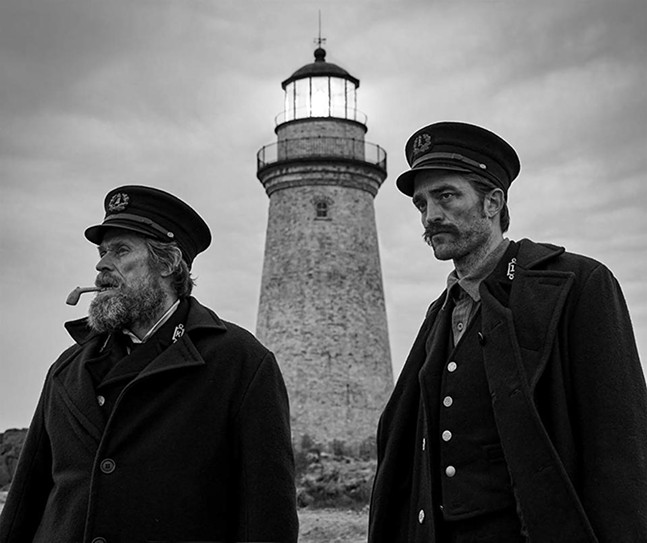 A24
Willem Dafoe and Robert Pattinson in The Lighthouse
Everyone has gross habits they do to let out primitive urges, whether it’s picking your nose, popping pimples, biting toenails, watching videos of other people popping pimples, or something worse. For director Robert Eggers, it’s making movies like The Lighthouse, an engrossing, and absolutely disgusting psychological horror film wherein two lighthouse keepers in 1890s New England slowly lose their minds (and every bodily fluid).

After giving up his job cutting timber in the dense New England forests, Winslow (Robert Pattinson), takes a job working as a junior lighthouse keeper, under the command of Thomas (Willem Dafoe), a haggard and gassy keeper who speaks in a barely decipherable growl. Thomas is the only one allowed to actually operate the light, much to the chagrin of Winslow, who has to do the more laborious tasks of scrubbing floors, carrying barrels of kerosene, painting the lighthouse, and emptying chamber pots. After a few weeks, Winslow begins to resent Thomas’ post at the light, and envy the ecstasy it seems to bring him. Thomas, on the other hand, knows Winslow didn’t come to the remote island just to get a change of scenery.

When the ferry that’s supposed to pick Winslow up never shows and the men are trapped by vicious storms, shit hits the fan (among other objects). For the entirety of his time on the island, Winslow is haunted by visions of siren screams and sexy mermaids washing up on the shore. He often masturbates to a small mermaid sculpture, and the creature begins to drive him mad. He becomes more and more obsessed with seeing the lighthouse light up close, but Thomas is steadfast in his refusal. He is also steadfast in his heavy drinking, which Winslow soon takes up, guzzling liquor out of the bottle until the two men are in a constant state of drinking, dancing, fighting, farting, vomiting, screaming, hallucinating, and punching. There’s a BDSM quality to their relationship, as Thomas replies to Winslow’s work complaints by saying, “you’ll like it cause I say you will.” (There’s also an incident with a dog leash, but no spoilers.) More than once, they want to kiss but end up in a fist fight.
The movie is deeply unsettling and, again, disgusting, but it’s also funny. The claustrophobia of the lighthouse, the grossness of the bodily fluids, and the haunting of the sea would all be suffocating if it weren’t for the humor cutting through. In one scene, Winslow says he doesn’t like Thomas’ cooking, which causes him to launch into a drawn out soliloquy, cursing Winslow with the wrath of Neptune. Another time, Winslow gets so exasperated with Thomas’ frequent farting that he yells that Thomas smells like “curdled foreskin.”

Watching Dafoe and Pattinson together is like watching two lone zoo animals meet another of the same species for the first time (a species with razor sharp cheekbones). The actors — and their characters — feed off each other’s intensity and it’s obvious they had fun doing so, unleashing a freedom they could only do in a two-man show as intimate as this.

The whole film is shot in black and white, using a square, silent film aspect-ratio (so the movie never takes up the whole screen). The filmmakers even used camera lenses from the 1910s and 1930s to make it look especially dated, and it does. The soundscape is also crucial to the film’s aura: the long deep blow of a foghorn, crashing waves, drunken sailor songs, siren screams.

In the end, the men’s relationship is too volatile for either to make it out whole, but not before bludgeoning the audience with its final, most grotesque scenes. The Lighthouse is a riveting, well-acted, and impressively made movie, and I never want to see it again.

The Lighthouse opens Fri., Oct. 25 at The Manor Theatre and AMC Waterfront.