The Light in the Piazza

No matter what you say about the Adam Guettel and Craig Lucas musical The Light in the Piazza (now being presented by Point Park University), nothing is more essential than talking about its humanity and ambition.

It's hard to have missed the dumbing-down of the Broadway musical over the past couple of decades. (They've got to run out of cartoons to adapt, don't they?) But in 2005, Piazza opened on Broadway. To say that it received universal acclaim is misleading, but it's surely one of the most highly regarded musicals of the past 10 years.

The story (based on a 1960 novella by Elizabeth Spencer) is simple: A formidable American woman named Margaret travels with her daughter Clara to Italy, where Clara falls in love with a Florentine man named Fabrizio. The show is about the cultural clashes between the two and, of course, a dark secret revealed late in the first act.

The real story, however, is the score, by Adam Guettel (grandson of theatrical legend Richard Rodgers). Giving himself over to the sweeping urgency and unalloyed innocence of first love, Guettel has written a score of intense, almost volcanic, passion and beauty; sections of this score are almost too gorgeous to be borne.

Unfortunately, Guettel doesn't know when to stop. That soaring lyricism just keeps coming and coming, and while it's impeccable musically, it doesn't work so well theatrically. That's because, ultimately, the plot is a bit melodramatic; when juxtaposed with the breathtaking sweep of the music, it seems small and uninteresting.

But let's not lose sight of the fact that when the story reaches the same intensity as Guettel's music -- Clara and Fabrizio finally announcing their love -- it's so beautiful you want to weep.

Not surprisingly, this is one hell of a show to perform; there's no theatrical gimmicks to cheat with, no enormous set pieces to hide behind. It's just cast, crew and Guettel (and Lucas).

Which makes it the perfect choice for a company of students the caliber of Point Park's Conservatory Theatre, under the smoothly polished direction of Scott Wise, and the musical direction of Camille Rolla. This is a work demanding absolutely every bit of talent the performers have, and I salute, among others, Katie Sexton, Courtney Bassett, Jaron Frand and Andrew Swackhamer for being so up for the challenge.

The Light in the Piazza continues through Sun., April 3. Pittsburgh Playhouse, 222 Craft Ave., Oakland. 412-621-4445 or www.pittsburghplayhouse.com 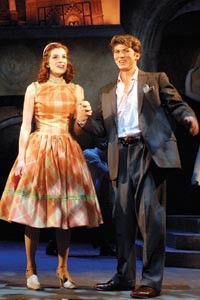