The Legend of Tarzan 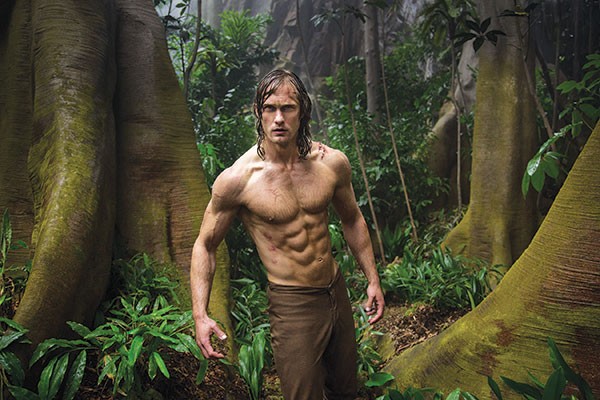 Come at me, bro: Alexander Skarsgard

The Legend of Tarzan

Directed by David Yates Starring Alexander Skarsgard, Margot Robbie, Christoph Walz, Samuel L. Jackson In English, and some Lingala, with subtitles
There have been hundreds of Tarzan films, so I’m not sure why we need the generically titled The Legend of Tarzan. I suspect the agent for Alexander Skarsgard’s abs pushed for it, but frankly, that impressive eight-pack could find work in any sort of film. Human-gorilla relations have been rocky this summer, so we could use a reminder of how to co-exist with our near-genetic relatives. Besides, it’s humans mistreating other humans that cause all the trouble, in this film and in real life.

I mention real life because David Yates’ film takes the unusual step of setting this Tarzan tale in an uncomfortable chapter of history. In 1890, Tarzan (Skarsgard), now living in England as Lord Greystoke, is asked by King Leopold II, of Belgium, to come to the Free State of Congo (which actually was the king’s private slave-labor colony). Tarzan will travel with his wife, Jane (Margot Robbie), and the American George Washington Williams (Samuel L. Jackson).

The whole thing is an elaborate trap: Leopold’s envoy, Leon Rom (Christoph Walz), plans to capture Tarzan and trade him to a tribal leader for access to a diamond mine, so that Leopold can continue financing his venture. None of this goes as planned. The good guys win, a herd of wildebeests charges a colonial barroom (“Don’t say beer, say bull!”) and everything turns out OK in Congo. (Real-life spoiler alert: It gets worse.)

A storyteller can drop Tarzan into any stretch of generic “African jungle” and tell the same basic tale. (Legend was filmed in England, using digitally added scenery shot in Gabon and the Dolomites.) Using the horrors of Leopold’s Congo as a plot device for a movie where Jackson cracks jokes about licking gorilla balls, and shirtless men get all Cirque du Soleil with jungle vines, seems like the worst sort of historical appropriation. (There was a real Leon Rom, reputed to be the inspiration for Kurtz in Joseph Conrad’s Heart of Darkness, and a real George Washington Williams, a Pennsylvanian who traveled to Congo in this time period and later wrote a scathing report about the abuses he witnessed. Historical accounts are silent on their interactions with Tarzan.)

Anyhow, movie-goers just want to see Tarzan snuggle with lions, get in a wrestling match with his gorilla brother, and generally indulge his playful wild side. Skarsgard and Robbie are fine specimens of humans, especially in their anachronistically skimpy clothing. The aforementioned scenery is gorgeous. Sadly, Africa’s great beasts depicted here are all digital creations, which makes for some awkward on-screen pairings. It also doesn’t bode well for improvements in man-gorilla relations, as we have less in common than previously thought: Turns out we’re made of flesh and blood, and they’re just ones and zeros.