How Farooq Ameen Al-Said got into activism 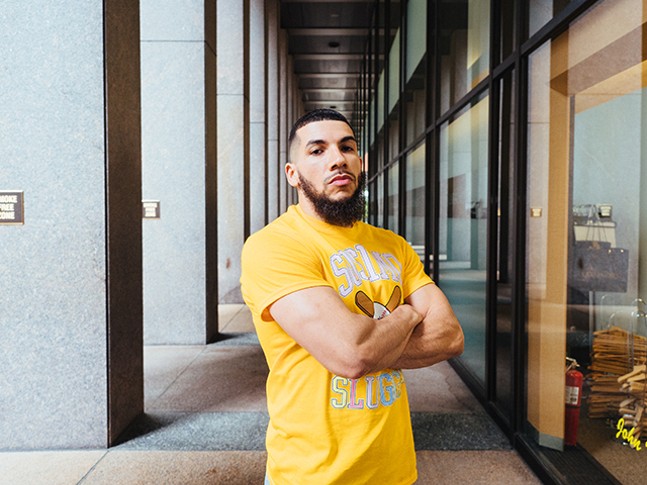 What does your title mean within this organization?

We are an arts and education program dedicated to activism and education through the lens of hip hop. I handle the logistics, artist management, day to day.

How did you get involved?

I was in a lot of trouble as a kid — locked up, almost deported. The law took an interest in me, so why can’t I take an interest in the law? That led me into different forms of activism through the arts. I’ve known Jasiri [1Hood co-founder and chief executive officer] a third of my life so coming to work for and with 1Hood was an organic companionship.

Do you separate the artistic and activist?

We use the word “artivist” — art is our activism, and activism is our art. We are the intersection.

We put our boots on the ground. During the Michael Rosfeld trial, we didn’t sleep. We had 24-hour days. These are things we’re emotionally invested in. I think a lot of people in these spaces get enamored with, “This can get me on CNN, on Fox News.” That’s not even in the scope of what we do. We’re like, “We live here. Let’s change some shit.” Sorry.

How does that affect your involvement when you’re not at work?

Sometimes you don’t get a decompression. It’s not a regular job. This is a lifestyle. It is dope, but at the same time, you’re always on the clock. I’m an immigrant, I’m a Muslim, I’m Black, and I’m Arabic. Every time I turn on the TV, I’m targeted. So I try not to turn on the TV.

I love hip hop. Then sometimes I find myself in spaces where I [have] to defend hip hop when I’m not working. Sometimes we become mouthpieces when we don’t even want to because of how tied in we are to the community. We don’t get the luxury of turning off our phone, shutting off the computer and saying, “I’m done for the day.”

Does it change how you look at art that doesn’t include activism?

I personally think there’s a balance between righteousness and ratchetness. I appreciate technicality and finesse and rhyme scheme — not always talking about the most socially conscious things. I’m socially conscious all day, sometimes I’m just like, “Put that on. That’s the type of time I want right now.”

But overall, I absolutely look at the impact the artist has on the culture. I can differentiate the artist trying to get that paycheck, or get out of that contract. I get it. You might not want to make that music, but you’ve got three albums left on that deal. But if you’ve invested in programs and things in the streets and community, I totally dig it. Get your money.

What are long-term goals, both here and personally?

Put roots in a lot of cities, create more solid partnerships so we can have more like-minded people moving forward, marching, mobilizing — really just trying to make better places, corny as that sounds.

Individually, I’ll be honest. This is the first time that I’ve given a lot of thought to, “Do I want the house with the picket fence? Do I want the 3.5 kids? Do I want all these things?” Right now my long-term goal is just to find stability and comfort, trying to exist in a world that isn’t welcoming to me.

Do you have a favorite part of this work?

I’ve had people come up to me and say, “Thank you for making us feel safe.” That, that feels good. I would say that’s the best thing.