The Lady in the Van

The Lady in the Van

This “mostly true story” begins in 1970, in the Camden Town area of London. Playwright (and confirmed bachelor) Alan Bennett (Alex Jennings) moves into the up-and-coming boho neighborhood, and discovers a fixture on his street: a homeless woman known as Mary (Maggie Smith), who lives in a van. Mary is just barely tolerated by the residents; they are proud of being liberal and can’t risk complaining too much. Bennett proves more of a pushover, and in time, Mary and her van are ensconced in his driveway, “just until you get sorted out.” And there she stays for 15 years. 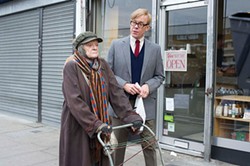 Nicholas Hytner’s film The Lady in the Van is an adaptation of Bennett’s 1999 play. And here, Bennett is portrayed as two halves by Jennings: Bennett the reluctant participant in Mary’s life, and Bennett the playwright, who mines these experiences for marketable material. The tale is further broadened by contrasting Bennett’s caretaking of Mary with that of his elderly mother, who, unlike Mary, is clean and properly behaved, but sinking into dementia. Bennett also gradually susses out the origins of Mary’s mysterious tics and asides (she speaks fluent French, has an aversion to music and a streak of religious mania).

One might fear that a feel-good “inspired by” dramedy about a nervous Nellie of a playwright who forms an unlikely, but ultimately satisfying, bond with a mentally ill homeless woman could easily tip into sentimentality, preachiness or both. Fortunately, Lady in the Van narrowly avoids those traps, while still delivering the sort of wry but cozy British vibe that keeps the arthouse matinees viable.

Jennings is good, and has the trickier role as both the story’s tour guide and the generous straight man to Smith’s livelier, funnier part. And Maggie Smith — the actress is on top of her game, but when is she not? The 82-year-old Smith has been running up the score in her golden years, joining the Harry Potter Cinematic Universe, bringing needed heft to the Exotic Marigold Hotel and simply owning TV’s Downton Abbey as the Dowager Countess.

Indeed, fans of Smith’s Countess will find analogues in Mary — the sharp tongue, withering looks and imperiousness in spite of facts. (In one aggrieved moment, Mary declares with certainty that if “I went south of the river, I’d be greeted with open arms.”) But Smith also delivers — with her expressive face, and from beneath Mary’s many protective layers — the humanity of a woman, battered by circumstances and tragedies, but still gamely and fiercely going on. In her own time, in her own way and, yes, with some assistance grudgingly provided by Bennett and accepted by Mary.