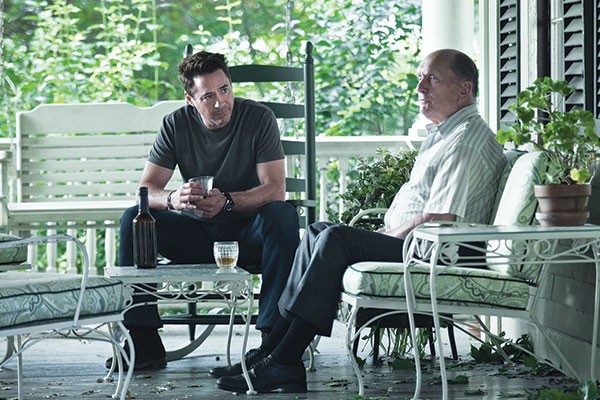 The two-word title is the leanest thing about David Dobkin's over-stuffed film. It's as if the writers bought every dusty marked-down-to-move plot at the Genre Store and rolled them up into one 141-minute sentimental ball. He may have saved some money, but viewers sure aren't gonna save any time.

Some ads for The Judge make it look like a legal thriller, but it's primarily a male melodrama. Oh sure, the handsome courtroom is there to uncover the truth — the truth about a troubled father-son relationship, that is.

Hank Palmer (Robert Downey Jr.) is a preening big-city lawyer who says things like "innocent people can't afford me." When his (sainted) mother dies, Hank returns to his small Indiana town for the funeral, and shares the awkward company of his estranged family: dad and longtime judge (Robert Duvall) and his two brothers (Vincent D'Onofrio and Jeremy Strong).

Hank's escape is thwarted when his dad is arrested for a hit-and-run and needs a decent defense attorney. Apparently the only one in town is a vomiting, antique-loving goober played by Dax Shepard, who is no match for the out-of-town prosecutor, portrayed by a reptilian Billy Bob Thornton, in a tight three-piece suit.

The re-education of son and the defense of dad takes mucho time, with shouting matches, unstartling revelations, detours into history and Hank's reunion with his high school girlfriend, Sam (Vera Farmiga). The script bends over backward to portray Sam as a strong independent woman (she owns things!), but alas, her role here is to help Hank self-actualize.

The Judge willfully careens between mystery, soap opera and comedy. (There's even a tornado, during which there is also a huge family fight.) Munching through this stuffed casserole are some good actors, who do find occasional moments of meaning and grace. But the script prefers Downey to be a snarky motor-mouth and Duvall to be grumpy and taciturn, and it rarely gives either actor an opportunity to drop their character's signature shield and do more nuanced work. The film is ultimately everything you'd expect from a TV movie, but with better actors.

To recap: You can't (or can) go home again. Nothing is as true as your first love. Family matters. Integrity beats money and the truth beats dodging jail. If only my father loved me. Things are better at the lake house. Pie matters. Courtrooms are for revealing big emotional secrets. Jerky people hurt, too. Ssssh, somebody has c-a-n-c-e-r. And you can always count on a small-town diner to be playing your favorite 1970s country songs.