The Importance of Being Earnest

It's difficult to know whether Conall Morrison, as director, merely allowed this production to happen or actually caused it. 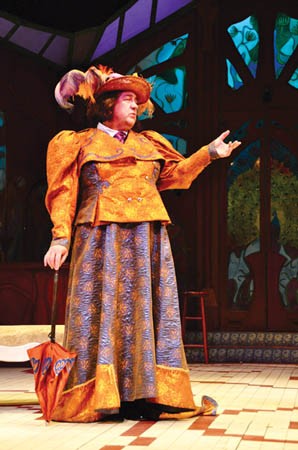 Photo courtesy of Suellen Fitzsimmons
Alan Stanford in PICT's The Importance of Being Earnest.

The Importance of Being Earnest is the greatest play ever written. So the unpleasantness of this Pittsburgh Irish & Classical Theatre production can't be blamed on the script. Instead, blame artistic arrogance.

Imagine the chutzpah in thinking: "You know what? Earnest needs me -- I can make it better!" Yet that's what director and "adapter" Conall Morrison did.

A true artist would think: "Dear baby Jesus -- I'll never be better than Earnest. It's unlikely I'll ever be as good. Just don't let me screw it up."

And so he's invented an absurd framing device depicting a disgraced Wilde in a Paris cafe. The evening opens with this Morrison-written 10-minute scene -- something no one would watch without being tricked into it -- that has Wilde, in a clichéd absinthe fog, imagining an all-male production of Earnest.

The second problem: If Wilde were imagining a production of Earnest, wouldn't he imagine the best one possible?

It's difficult to know whether Morrison, as director, merely allowed this production to happen or actually caused it. Regardless, we have three hours of actors running amok with no sense of period or performance style.

David Whalen plays Jack Worthing like he's auditioning for Damn Yankees! He leaps over furniture, bounds across the stage and shouts to the last row of the balcony -- punctuating each line with hand gestures like an ASL interpreter on crack. This is the first Jack I've ever seen in danger of ripping both a vocal cord and a hamstring.

Will Reynolds seems to believe that his character, Gwendolyn, not only invented "jazz hands" but was the first contestant in RuPaul's Drag Race. Morrison has the poor kid gesticulate so often and so wildly you'd swear he's landing a plane.

Morrison also has Matthew Cleaver perform Cecily in falsetto, making him sound like Miss Piggy and reducing his vocal range to three notes. And Algernon, that epitome of languid cool, is rendered by Leo Marks as an impish sprite from Midsummer.

Two things I did enjoy: Alan Stanford warms up in his role as Lady Bracknell and is quite entertaining by the second act. And Sabine Dargent's Art Noveau set is breathtakingly beautiful.

THE IMPORTANCE OF BEING EARNEST continues through Aug. 27. Stephen Foster Memorial, Forbes Avenue at Bigelow Boulevard, Oakland. 412-394-3353 or www.picttheatre.org