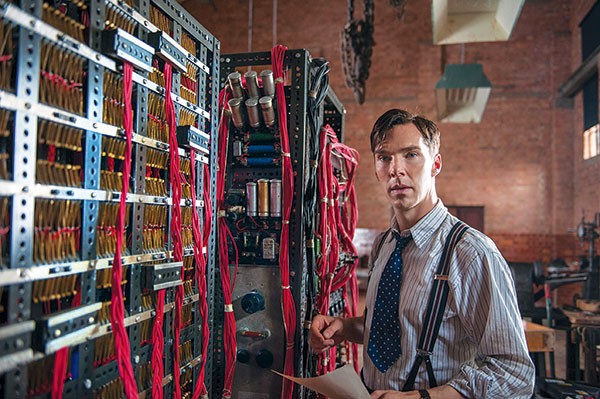 Seems like every year around the holidays, Santa (or Father Christmas, if you prefer) delivers one of those sturdy British crowd-pleasers: a period dramedy (often adapted from true events), with tip-top actors, perfectly aged tweeds and a feel-good, lightly inspirational and/or educational vibe. Think: The Iron Lady, The King's Speech.

The package this year —Morten Tyldum's bio-pic about the influential mathematician Alan Turing — is just as prettily wrapped. But once opened, it's not quite as packed as one hoped, and a bit depressing to boot.

During World War II, Turing (Benedict Cumberbatch, mastering a number of vocal and physical tics) is hired to help break "Enigma," a code-generating machine with which the Nazis are sending their strategic commands. Turing is an odd sort to lead a military team — he has no social skills and is secretly gay — but he's undisputedly the best nerd for the job: It's he who correctly realizes it will take another machine — not a human or even a 100 humans — to defeat Enigma.

The egghead thriller narrative is entertaining, as a tea-drinking crew in hand-knit sweaters takes on a tricky bit of German engineering, with the stakes being hundreds of thousands of lives saved. The film is murkier on Turing, whose personal life was marked by depression and presumably a lot of conflicted feelings about his identity. I say presumably, because while the film drops hints and Cumberbatch finely emits a lot of buttoned-up something, Turing's inner life remains unexplored.

Still, it's a fine trip out for the holidays — a mostly solid piece of entertainment, in which you will learn about: the fascinating Enigma project (top secret until only just recently); the man who built an early computer; how technology can leap ahead in ways cultural tolerance cannot; and that the oddly featured Mr. Cumberbatch does make a more interesting leading man than the usual square-jawed set.