The Ides of March

Like so many political candidates, the film promises more substance than it delivers 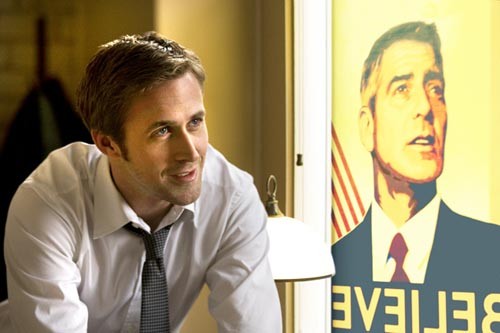 The political melodrama The Ides of March unspools one of the genre's basic storylines: Idealistic young man has scales painfully ripped from his eyes, adapts by joining everybody else on the low road. George Clooney's film offers some satisfying riffs on this age-old transformation, and a top-notch cast. But like so many candidates, it promises more substance than it delivers.

Our fair-haired boy is Stephen (Ryan Gosling), rising behind-the-scenes star and media manager for Gov. Morris (George Clooney), who's angling for the Democratic nomination for president. The primary race has come down to Ohio (where else?), and both candidates' teams are playing all the angles. The campaign managers -- Paul (Philip Seymour Hoffman), for Morris, and Tom (Paul Giamatti), for his opponent -- are each maneuvering to secure the critical endorsement of an also-ran (Jeffrey Wright).

Stephen turns off the path of righteousness when he (1) meets clandestinely with Tom about maybe switching teams, and (2) beds an intern (Evan Rachel Wood, who might as well have "plot device" stamped on her forehead). Secrets lead to lies, back-room deals, betrayals, and real and fake protestations of outrage, until finally the dreamers (a.k.a. losers) are tossed overboard, and the cynics (a.k.a. winners) are steering the ship.

While I enjoyed Ides, it didn't bring much new to the table. There seemed to be a more thoughtful story buried beneath soap-opera set-ups. (The film certainly tips its hat to Michael Ritchie's The Candidate, still sharp after four decades.)  Today's political junkies, immersed in a 24-7 media cycle, have pretty much seen it all, inside and out. Politics is a soul-sucking tangle of smiling, opportunistic back-stabbers? You don't say. (For thrills, chills and endlessly shifting narrative, may I suggest the Republican primary battle?)

The Ides of March has been adapted from Beau Willimon's play Farragut North. (The inside-the-Beltway title was dropped for a combo nod to Julius Caesar and the primary season that may still leave viewers puzzled.) The play's structure remains in the film's orderly march of two-person conversations, when a more dynamic narrative might have effectively tapped the frantic milieu that is a high-stakes campaign.

Yet, it's a trio of those chit-chats that provides the film's payoff, as Gosling goes mano-a-mano with Giamatti, Clooney and Hoffman. On the surface, the talk is relatively quiet -- no showy pyrotechnics -- but it's here that the tumblers drop, and the various betrayals are laid bare. Who doesn't want to see Giamatti and Hoffman twist and spar, inhabiting the weathered, leathery hides of political bulls who know just where to plant the knife?