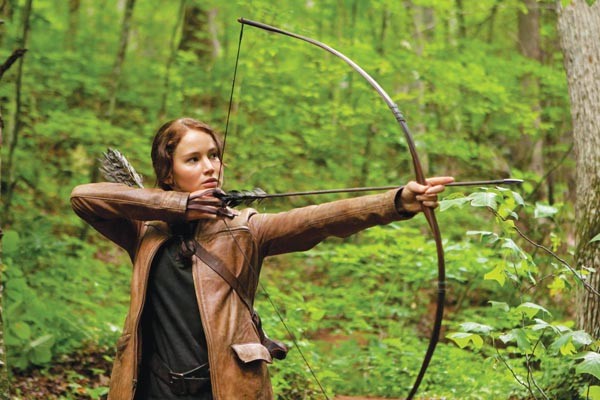 In some dystopic future, America is divided into 12 districts, and run by an elite central city. Each year, in a twisted bit of patriotism, the Capitol stages The Hunger Games. A teen-age boy and girl from each district are chosen by lottery, whereby they travel to the Capitol. There, they are pitted against one another in a nationally televised death-match, until there is a sole survivor.

In Gary Ross' well-produced drama adapted from Suzanne Collin's novel The Hunger Games, we root for Katniss (Jennifer Lawrence), a no-bullshit girl from a poor mining district with a gift for archery. Her fellow fighter is Peeta (Josh Hutcherson), a bit of a softie, but really, who he is is moot: Only one can win.

The first half of the film sets up the games, as Katniss and Peeta are made-over for TV. They get a stylist (Lenny Kravitz), a ditzy tour guide (Elizabeth Banks) and a drunken but savvy advisor (Woody Harrelson); their skills are assessed for the bookies, and they give awkward interviews to the Games' fatuous host (Stanley Tucci). Then, the killing begins.

There's just enough social critique to elevate Hunger Games above a simple kill-or-be-killed actioner. The games have the illusion of fairness ("may the odds be ever in your favor") but some districts are more equal than others; not surprisingly, kids from wealthier areas fare better in the games. (We may be predisposed to favor the underdog, but the President notes that too much hope makes the underclass dangerously restless.)

And there's the added element that this entire kids-killing-kids spectacle is broadcast live for the entertainment of the ruling classes and edification of the masses. This ghoulish reality-TV aspect works better on film than in the book, as we also see the games through the eyes of color commentators, manipulative producers and audience members, both giddy and horrified. Likewise, the contestants are forced to play to the camera, adopting personas and performing great feats, in order to advance in the games. It's an easily digestible meta-text about our own relationship with reality TV, which often relies on humiliation, betrayal and danger. (Recall all those starving, injured people lucky enough to be the last man standing on Survivor.)

This is part one of a trilogy, so the ending is an enigmatic bit of hanging thread. I get that, but I wish that after more than two hours of intensity, the film could have ended on a powerful note, rather than with the Capitol's President brooding. But, the real game has just begun.