The Hunchback of Notre Dame at Pittsburgh Musical Theater

There isn’t a weak voice in the house 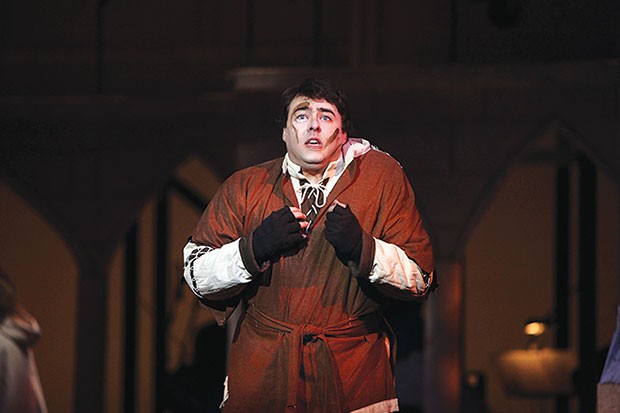 Quinn Patrick Shannon in The Hunchback of Notre Dame, at Pittsburgh Musical Theater

THE HUNCHBACK OF NOTRE DAME

continues through Sun., Feb. 5. Byham Theater, 101 Sixth St., Downtown. $17.75-54.75. 412-456-6666 or pittsburghmusicals.com
These days, virtually every Disney animated feature is getting its due on the stage. This time around, it’s The Hunchback of Notre Dame, making its regional premiere at Pittsburgh Musical Theater. The production aims to blend both the Victor Hugo novel and the 1996 Disney animated feature film, but a few key scenes aside, it more closely mirrors the latter, utilizing many of the same songs and snippets of dialogue.

The show features music and lyrics by Alan Menken and Stephen Schwartz, respectively. For PMT, Ken Gargaro and Colleen Doyno direct a talented cast against the backdrop of a beautiful cathedral set, and there isn’t a weak voice in the house. Particularly, as the chilling and pious priest Dom Claude Frollo, Allan Snyder maintains a notable degree of humanity that the analogous Disney character decisively lacks, elevating what could have been a one-note performance into something truly transcendent.

On the somewhat more lighthearted side, the 10 actors who play the gargoyles are an absolute delight as they offer advice to the often indecisive Quasimodo. A standout performance comes from Brady David Patsy, in the dual roles of King Louis and one of the gargoyles; he effortlessly steals scenes with his every line and slightest mannerism. The play, of course, hinges on the eponymous outcast, and actor Quinn Patrick Shannon is up to the challenge. As the heart and soul of the show, Shannon captures the pathos and longing of one of literature’s greatest characters. And wow, can he sing.

However, for all the production’s strengths, many of the same criticisms leveled against the Disney cartoon can be cited here — namely, the glossing over of the novel’s more nuanced themes, as well as the insensitive treatment of Gypsies as having made a freewheeling lifestyle choice rather than as possessing a unique ethnic identity. In particular, it’s profoundly disappointing that the show did not cast more actors and actresses of color in these roles. Such serious shortcomings mar what would otherwise be a perfectly dazzling way to spend an evening.