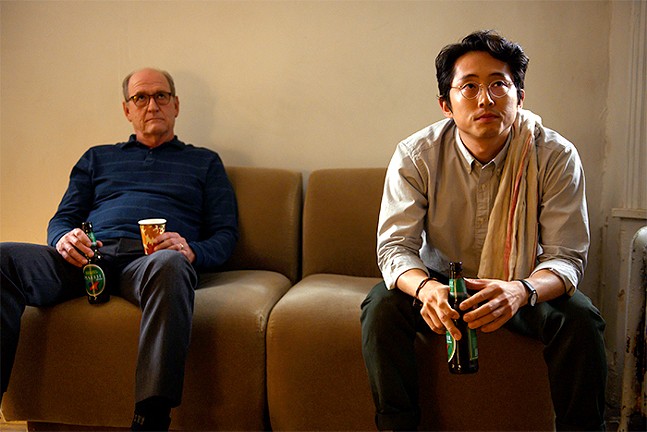 Richard Jenkins and Steven Yeun in The Humans
In a year where a lot of the “prestigious” horror movies have fallen somewhat flat, Stephen Karam’s The Humans introduces a new sort of terror: shitty Manhattan apartments.

Based on his own Tony Award-winning play, Karam’s directorial debut, premiering in Pittsburgh as part of the Three Rivers Film Festival on Mon., Nov. 15 at Waterworks Cinema, is a masterwork of uncomfortable, naturalist filmmaking. Three generations of a family gather in Brigid (Beanie Feldstein)’s awful new New York City apartment for an abridged Thanksgiving celebration. And ... that’s really it. The entire film takes place here, with the six of them gathering, laughing, arguing, and finding themselves over the course of the night in a degenerate apartment filled with random creaks and bangs.

It should be stated right up front that The Humans takes many of its cues from the stage, which may not be for everyone. Originally produced for the theater, it won the 2016 Tony for Best Play, was a finalist for the Pulitzer Prize in drama, and was performed locally in 2017 at the Pittsburgh Public Theater. Like the original production, the film is slow, and takes great care over the smallest moments in these characters’ lives. But if that’s up your alley, then the film will reward you with an incredibly haunting, moving piece that is different from just about anything that’s hit cinemas in 2021.

The Humans is depressing, but not in the cascade of sadness found in a lot of melodramas. No, this is death by a thousand back-handed comments, startlingly accurate in the way it understands the little things that only family members can know to get under each other’s skin. It chips away at you, breaking each of these characters down to their most insecure versions of themselves. It reveals humans who are deeply unhappy with themselves, with their position in their lives, with the decisions they’ve made to get to this point. It’s brutal, much like the way the very worst family dinners are.

This could all be too much, but it’s pulled back beautifully by a magnificent cast that carries the film at every turn. Feldstein is wonderful as a woman trying to make it out on her own, knowing what she’s up against in trying to do so. As her boyfriend Richard, Steven Yeun nails the exasperated flailing that goes with trying to put out every fire, all at once. Even Amy Schumer delivers a career best turn as Brigid’s sister, Aimee, a woman who’s had life beat her up and is trying to find a way to stay afloat.

However, the showstoppers here are the parents, played by Richard Jenkins and Jayne Houdyshell. Jenkins has long been one of Hollywood’s great role players, a 1970’s throwback of an actor who truly feels like he disappears into the everyman roles he plays. Here, his Erik is the centerpiece, a man spiraling out of control and trying to put it on everyone else. And Houdyshell, a holdover from the stage production, is a breakout star; equal parts cruel, hardworking, and deeply overwhelmed.

This is a deeply strange film, a family affair crossed with an existential nightmare with a dash of A24 arthouse horror thrown in when needed. It lags some in the middle, and could use the benefit of an intermission like most stage performances. But this is a cast and a writer/director with a full grasp on something unique, and they turn The Humans into one of the better films this year. The Humans at Three Rivers Film Festival. 7:15 p.m. Mon., Nov. 15. Waterworks Cinema. 930 Freeport Road, Aspinwall. filmpittsburgh.org