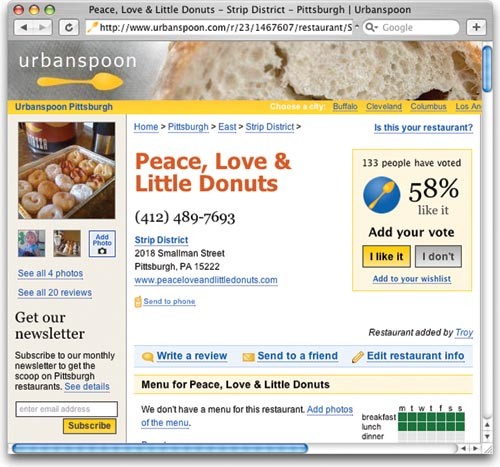 The Internet is supposed to be a forum for unfettered discussion. Unless, it seems, you want to question a restaurant's marketing campaign on a popular food-review Web site.

That's what some LGBT advocates say they learned last month, when they took on the owner of Peace, Love & Little Donuts.

The Strip District bakery opened this summer with a marketing effort -- which featured a peace sign and the trademarked slogan "Feed your inner hippie" -- that seemed like a pitch to lefties. But in a blog titled "As I Was Saying," owner Ron Razete expressed highly conservative views about issues like Barack Obama, gay rights and abortion.

His post on the day of Obama's inauguration, for example, charged that "This crowd will not rest until Homosexuality is mainstream; until the Second Amendment is done away with; until abortion on demand is as common and accepted as going to the dentist." In a later post on his Facebook page, Razete called gays and lesbians an "immoral minority."

Razete's blog -- subtitled "Observations and interests from a middle aged man fighting for truth, justice and the American Way" -- has since been shut down. But given the views expressed there, the donut shop's branding is misleading, says Sue Kerr, who authors the blog Pittsburgh Lesbian Correspondents. "Most hippies I know are not homophobic," she says.

"If you just opened Ron's Donut Shop and spewed your homophobic views, there wouldn't be an issue," Kerr adds. "But all this behavior is very inconsistent with what 'Peace, Love & Little Donuts' conveys."

Kerr and some other like-minded critics sought to make that argument in public. On Sept. 30 and Oct. 1, they inundated Urbanspoon.com, a popular restaurant-review Web site, with their objections.

The site, which features listings for restaurants in dozens of cities, links to blog posts and professional reviews written in other media. It also allows site visitors to write reviews, and to vote on whether they "like" or "dislike" certain restaurants.

At least in theory.

"I posted [comments] three different times, and they were all removed," says Ehrrin Keenan, a local food blogger who moderates an LGBT mailing list. But almost as quickly as her comments went up, Urbanspoon.com took them down. "I was like, 'What the hell is going on?'"

Kerr estimates that roughly a dozen negative comments posted by members of the LGBT community were stricken from the site. Twice, for example, Kerr says she commented on the donut shop's "deceptive branding" -- only to find her posts removed shortly after. On Oct. 1, Kerr posted another short comment. Titled "3rd time is the charm?," her comment simply reads, "I am not a fan." That post survived.

Votes seemed to disappear as well. Keenan says that when she first visited Urbanspoon, the donut shop had received "like it" votes from 85 percent of visitors. By the end of the day Sept. 30, she says, the percentage had dropped under 50 percent, based on more than 150 votes.

The following day, however, Keenan says Urbanspoon was showing only 60 votes cast -- and three-quarters of those were in the "like it" column. And as of Nov. 2, Peace, Love & Little Donuts' "like it" rating stood at 58 percent, based on 133 votes. Written comments about the bakery were mixed. Out of 18 reviews, a little more than half were negative. While some faulted "rude service," none mentioned Razete's blog posts or politics.

Kerr and Keenan both e-mailed Urbanspoon for an explanation.

"I've had my reviews deleted three times," Keenan wrote to Urbanspoon on Oct. 1. "I'm sure the owner might not like what I have to say, but my comments (and those of others I've seen deleted) are absolutely relevant to the business."

"We don't remove reviews to please an owner," Urbanspoon's Janet Becquey responded in an Oct. 1 e-mail. "We prohibit certain things from reviews, including profanity, personal attacks and legal issues. It's possible that your review was in violation of one of those things."

Kerr, who received a similar e-mailed explanation from Becquey, acknowledges that a few posts deserved to be taken down, because they made personal smears against the owner. But comments charging Razete with hypocrisy are fair game, she says. "Why is branding and marketing not a valid criteria for feedback?" she asks.

Becquey did not respond to subsequent e-mails from Kerr and Keenan seeking further explanation. Nor did she return a City Paper reporter's e-mail. Calls to officials from Urbanspoon's parent company, InterActiveCorp (IAC), were also not returned.

According to Urbanspoon's Terms of Service, the company "may, at any time in our sole discretion, move, edit, delete, or destroy any materials that you provide or deliver" to the site.

Razete declined to comment for this story, saying that responding to his critics "is just going to continue to promote this battle."

"It's not uncommon [for Web sites] to have controversies over what comments should be taken down," says Matt Zimmerman, senior staff attorney for the Electronic Frontier Foundation, a civil-liberties group that specializes in Internet issues. "But this [situation] actually implicates the First Amendment rights of Urbanspoon," not site users.

"Legally speaking, there is nothing wrong with Urbanspoon's behavior," he continues. "They have the right to decide which speech they want to include."

And Sue Kerr is happy to say exactly what she thinks about their decision.

Posting on Urbanspoon was a chance for the LGBT community "to stand up for itself," she says. "Urbanspoon's censoring was targeting the gay community."